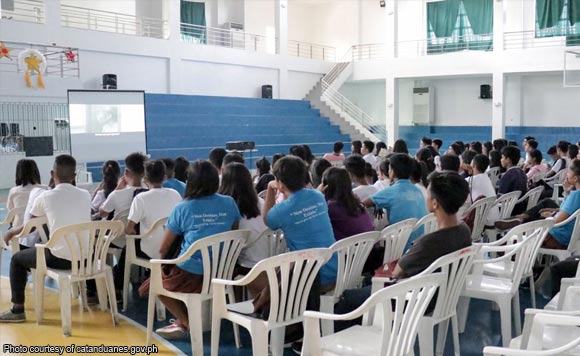 0 443
Share
Want more POLITIKO News? Get the latest newsfeed here. We publish dozens and dozens of politics-only news stories every hour. Click here to get to know more about your politiko - from trivial to crucial. it's our commitment to tell their stories. We follow your favorite POLITIKO like they are rockstars. If you are the politiko, always remember, your side is always our story. Read more. Find out more. Get the latest news here before it spreads on social media. Follow and bookmark this link. https://goo.gl/SvY8Kr

The Office of Governor Joseph Cua held a two-day free screening of Bikol film starring Nora Aunor as part of its thrust to promote culture and the arts in the province.

The screening was held at the Catanduanes Convention Center last December 10-11, 2018.

“The film, Hinulid, is directed by award-winning Bicolano writer and filmmaker, Kristian Sendon Cordero. Using Bikol-Rinconada as its medium and Iriga as its setting, it centers on a story of a mother who lost her son in a fraternity-related hazing violence, traversing tropes of poetics, philosophy, religion, myth and culture,” the provincial government said.

“A highly-acclaimed film in the national and international scene, Hinulid also received loud cheers and applauses from Catandunganon audience,” it added.

Meanwhile, the official Facebook page of Hinulid lauded the efforts of the provincial government to promote literature and arts in the province.

“With the governor keen on advocating the cultural identity and heritage of Catanduanes, the provincial government has supported a number of programs and activities aimed to cultivate the soft elements of the province, such as the co-sponsoring the launching of budding literary-advocacy group, SurTe; book launching of Pwera Bisita, a collection of Catandunganon stories authored by two-time Palanca awardee Emmanuel Barrameda; and literary workshop with poets Lourd de Veyra and Allan Popa,” said the provincial government.