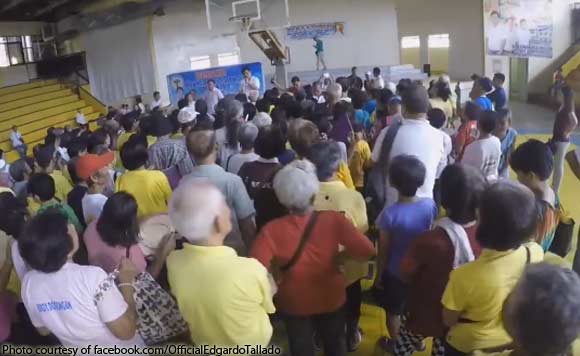 0 696
Share
Want more POLITIKO News? Get the latest newsfeed here. We publish dozens and dozens of politics-only news stories every hour. Click here to get to know more about your politiko - from trivial to crucial. it's our commitment to tell their stories. We follow your favorite POLITIKO like they are rockstars. If you are the politiko, always remember, your side is always our story. Read more. Find out more. Get the latest news here before it spreads on social media. Follow and bookmark this link. https://goo.gl/SvY8Kr

Senior Citizens in Albay gathered at the Albay Astrodome for their year-end general assembly organized by the Capitol.

“A numerous performances was presented by the senior citizens including dance and singing numbers and role plays coming from the different municipalities,” said the provincial government.

Albay Governor Al Francis Bichara said the Capitol prioritizes the the senior citizens as he encouraged them to “never stop learning.”

The Governor said that they can spend their time at the farm school, Albay Farmer’s Bounty Village located in Cabangan, Camalig.

Bichara also bared his plans to buy an air-conditioned bus for the senior citizens to give them free trips.

Governor Bichara wished them a longer life as he assured that the Provincial Government will address their needs.

“The Provincial Government of Albay gave 18 units of desktop with printers to the LGU offices of senior citizens. An awarding of certificate of recognition to senior citizens elected barangay officials was also held,” said the province.