Maroon and proud! Ako Bicol Rep. Rodel Batocabe has a family of proud iskos and iska 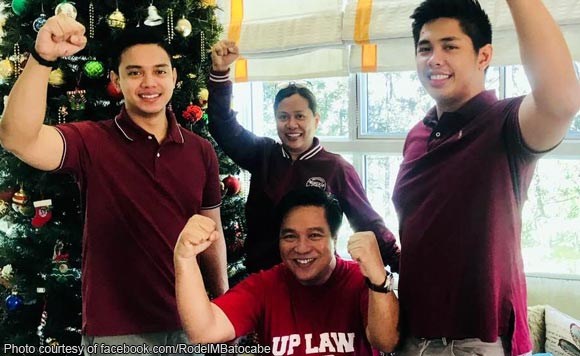 Ako Bicol Rep. Rodel Batocabe, his wife, and their two kids all studied in UP.

In a Facebook post, Batocabe recalled that he and his wife were still students when UP last reached the finals in basketball.

Their two sons also studied in the State U, although they do have Ateneo and La Salle ties as well.

But make no mistake about it. They are all proud maroons!

“Atin ‘to. Amin din ito…. The last time UP reached the UAAP basketball finals, the wife and I were still UP students. Two kids hence, who all studied and in the case of the second son Kiel, who is still studying in UP, it will be a big sin if we, as a family, will not be there to witness history and root for the family’s Alma Mater. So win or lose, our hearts will always go to the UP Maroons, though elder son Justin is also an Ateneo alumnus. As for Kiel, who is a La Salle alumnus, there is no doubt whatsoever that he will cheer for his present school,” Batocabe posted on Facebook.

Wag kampante! VP Robredo says increased testing not the only…