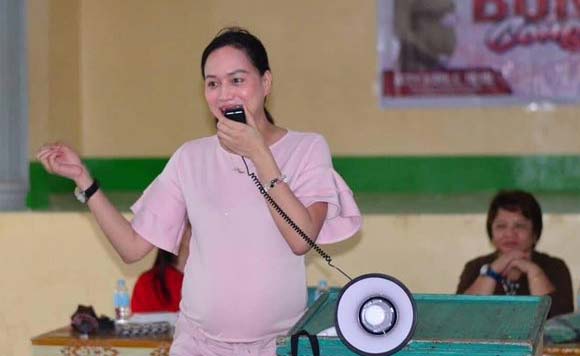 0 401
Share
Want more POLITIKO News? Get the latest newsfeed here. We publish dozens and dozens of politics-only news stories every hour. Click here to get to know more about your politiko - from trivial to crucial. it's our commitment to tell their stories. We follow your favorite POLITIKO like they are rockstars. If you are the politiko, always remember, your side is always our story. Read more. Find out more. Get the latest news here before it spreads on social media. Follow and bookmark this link. https://goo.gl/SvY8Kr

A new born baby in Masbate has been named after Vice Governor Kaye Revil.

The Masbate VG shared that a mother who just delivered a healthy baby girl opted to named the child “Kaye.”

Revil, who is pregnant for her fifth child, said that she was really touched with gesture.

“It has been a fulfilling day as is. So many pregnant came to our Buntis Congress despite the rains in Milagros,” said the Vice Governor.

“Pero eto pa, matutulog nalang ako, may pahabol pampainspire pa. A mom who just gave birth, named her baby after me. I am immensely touched. Lord, to You my God be the glory,” he added.

Revil has been active these past few days for her Buntis Congress initiative in Masbate as she tours around various towns for the said caravan.

The latest local government to benefit from her Buntis Congress was the Aroroy town.