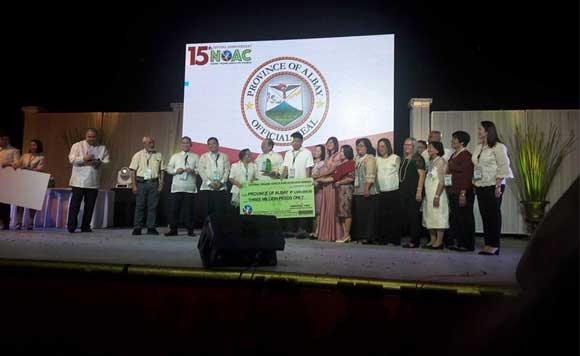 0 1,795
Share
Want more POLITIKO News? Get the latest newsfeed here. We publish dozens and dozens of politics-only news stories every hour. Click here to get to know more about your politiko - from trivial to crucial. it's our commitment to tell their stories. We follow your favorite POLITIKO like they are rockstars. If you are the politiko, always remember, your side is always our story. Read more. Find out more. Get the latest news here before it spreads on social media. Follow and bookmark this link. https://goo.gl/SvY8Kr

The Province of Albay has bagged the 2018 National Most Outstanding Province in Organic Agriculture Award.

The province got a plaque and recognition of the exemplary performance of Albay in Organic Farming.

APAO Head Che Rebeta also received given a P3 million cash prize to be used for further developments and projects in organic farming.

Governor Bichara earlier said that he envisions Albay to be the “vegetable bowl of the Bicol region,” whereby nearby provinces will flock to Albay for their agricultural needs.

“Albay has all the right elements to the be in the forefront of the agriculture sector, all we need is to provide all the support that we can offer to our farmers, and utilizing the latest innovations to give them that extra edge,” Bichara said earlier.

“The Department of Agriculture, the lead agency which evaluated and recognized the LGUs intensified campaign on organic agriculture, holds the annual awards ceremony to recognize the efforts of Government agencies and personnel that promotes and implements programs in relation to Republic Act No. 10068, or otherwise known as the “Organic Agriculture Act of 2010,” the province said.