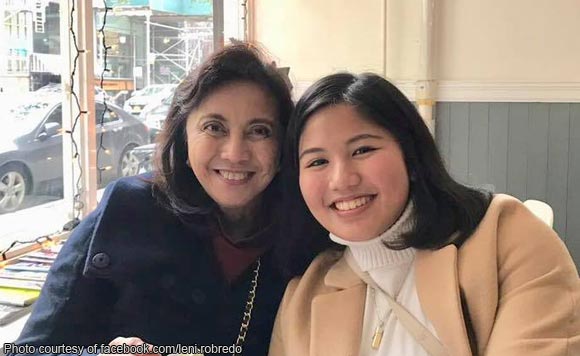 Vice President Leni Robredo has missed her youngest daughter Jillian since the latter went off to study in New York, so she made sure to snatch some time to see her during a recent working trip to the United States.

Robredo was in the US and Canada for speaking engagements and meetings in San Diego, Vancouver, Washington DC and New York.

Her schedule was grueling and tiring because she spent less than two days in most of the cities.

But the end was worth it because after her last official meeting in New York that ended on a Thursday, she filed for leave on Friday and Monday to spend a time with her youngest daughter.

It was the first time she saw Jillian since the latter flew to the US, and it was definitely a precious weekend spent together, she said in a Facebook post.

“My recent trip brought me to San Diego, Vancouver, Washington DC and New York for a series of speaking engagements and meetings. Super tiring because I spent less than two days in each of those cities, except New York.

My last official meeting in New York ended late Thursday. Decided to file for a leave of absence Friday and Monday so I could spend the weekend with Jillian. Such a precious weekend. It was my first time to visit her since she left,” the Vice President shared on Facebook.