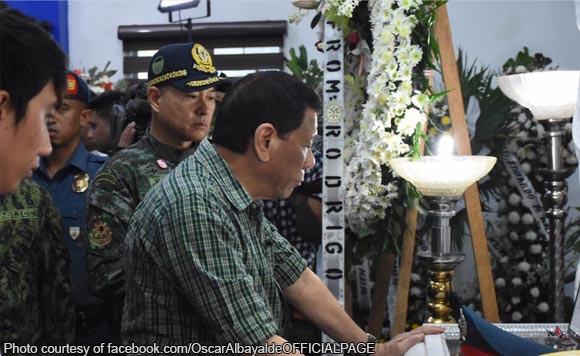 0 1,706
Share
Want more POLITIKO News? Get the latest newsfeed here. We publish dozens and dozens of politics-only news stories every hour. Click here to get to know more about your politiko - from trivial to crucial. it's our commitment to tell their stories. We follow your favorite POLITIKO like they are rockstars. If you are the politiko, always remember, your side is always our story. Read more. Find out more. Get the latest news here before it spreads on social media. Follow and bookmark this link. https://goo.gl/SvY8Kr

MANILA — President Rodrigo Duterte on Tuesday visited the wake of PO1 Ralph Jason Vida, one of three policemen killed in an ambush in Camarines Sur on October 18.

At Vida’s wake at the Camarines Sur Provincial Police Office in Naga City, Duterte also condoled with the bereaved families of Vida as well as SPO1 Percival Rafael and PO3 Carlito Navarroza.

According to media reports, the NPA’s Norben Gruta Command claimed responsibility for the attack of Puno’s convoy.

The President also sympathized with the families of Pvt. Ruben Bersabe and Cafgu Active Auxiliaries (CAA) Teodoro Adoptante who were killed in two separate encounters with NPA rebels in Labo, Camarines Norte and Lupi, Camarines Sur on October 14.

Duterte conferred the Order of Lapu Lapu Rank of Kalasag on the three slain cops as well as on Bersabe and Adoptante.

The Kalasag Medal is awarded to officials and personnel of the government and private individuals who lost their lives as a direct result of their participation in an activity pursuant to a campaign or advocacy of the President.

Meanwhile, Duterte cancelled his scheduled visit to Sagay, Negros Occidental on Tuesday due to inclement weather.

Duterte was supposed to visit the wake of nine sugarcane workers who were fired upon by armed men while they were eating dinner inside makeshift tents at Hacienda Nene in Barangay Bulanon in Sagay on October 20.

Malacañang condemned in the strongest possible terms the “dastardly act”, assuring the families of the victims that government will conduct a “thorough and impartial” investigation.

Presidential Spokesperson Salvador Panelo said Duterte has issued a directive to investigate the killing of the sugarcane farmers. (PNA)