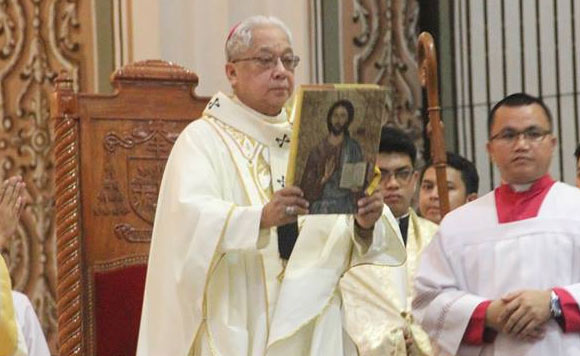 0 1,083
Share
Want more POLITIKO News? Get the latest newsfeed here. We publish dozens and dozens of politics-only news stories every hour. Click here to get to know more about your politiko - from trivial to crucial. it's our commitment to tell their stories. We follow your favorite POLITIKO like they are rockstars. If you are the politiko, always remember, your side is always our story. Read more. Find out more. Get the latest news here before it spreads on social media. Follow and bookmark this link. https://goo.gl/SvY8Kr

Most Rev. Rolando Tria Tirona, archbishop of Caceres, has lauded the efforts of the local government of Naga, as well as the police and military personnel for keeping the city peaceful during the Peñafrancia celebration.

During the Monday’s flag-raising, city government officials and employees, hundreds of personnel from the Philippine National Police, Philippine Army, Bureau of Fire Protection and other heads and members of inter-agency task groups gathered for a send-off rite.

“The farewell ceremony was highlighted by the awarding of certificates to personnel and volunteers of the Joint Operations Center (JOC), delivery of ‘thank you’ speeches, photo sessions, reciting of prayers for the parting groups, and blessing them with holy water,” said the city government.

In his letter, Tirona said that he has seen their hardwork and sacrifices to make the celebration of “Ina’s fiesta truly edifying and meaningful.”

“In the same manner, I noticed that your efforts and hard work for the success of our Peñafrancia fiesta is remarkable. My gratitude to all of you, especially to those with direct assignments or tasks during the two week festivities,” the archbishop said.

He also thanked them “for being models of true love and devotion to Nuestra Sra. De Peñafrancia because of their prayers and active participation during the novenario to the Divino Rostro and to Blessed Virgin Mary.”

“To all of you who rendered service to make our festivities peaceful and orderly, I have seen your way of humble service as an expression of love and veneration to Ina. This gives me tremendous joy. I salute all of you involved in various religious and civic activities because you certainly have served with dignity and devotion.”

Tironsa said that with their services and efforts, he is confident that Ina will help them with God’s grace and blessing including your families.

“I also conveyed my gratitude to those who have been our partners in making 2018’s celebration of Our Lady of Peñafrancia a magnificent and blessed one,” he said.