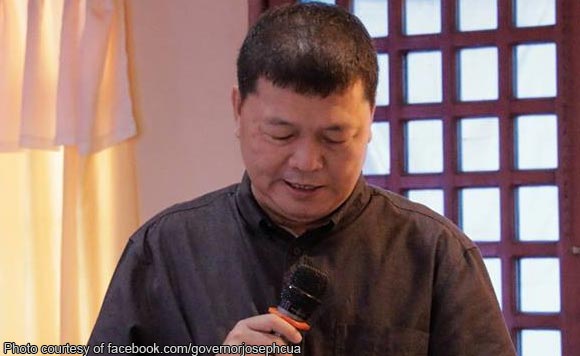 0 1,091
Share
Want more POLITIKO News? Get the latest newsfeed here. We publish dozens and dozens of politics-only news stories every hour. Click here to get to know more about your politiko - from trivial to crucial. it's our commitment to tell their stories. We follow your favorite POLITIKO like they are rockstars. If you are the politiko, always remember, your side is always our story. Read more. Find out more. Get the latest news here before it spreads on social media. Follow and bookmark this link. https://goo.gl/SvY8Kr

Catanduanes Gov. Joseph Cua has renewed his call to Rep. Cesar Sarmiento to push for a congressional inquiry to find the people responsible for the province’s power crisis.

Cua has also made a similar plea to Sarmiento before during the Catanduanes National High School PTA Induction Ceremony.

“That is why in my own effort as governor, during the CNHS PTA Induction Ceremony, I requested our dear Congressman to conduct Congressional Inquiry. And at this very point, I will request the same. Conduct a congressional hearing to find answers regarding the 2nd Amendment of ESA between Ficelco and SUWECO”, Cua saod during the 41st General Assembly of FICELCO, the province’s lone power cooperative last September 1.

Rep. Sarmiento represents the lone district of Catanduanes at the House of Representatives.

The governor said that with the “efficient kind of linkages” Sarmiento has, he can make the inquiry happen like the previous probes on shabu laboratory and the illegal logging.

The local chief executive also pointed that what is hampering the cooperative action to find solution for the “infuriating brownout” is the Secomf Amendment of the Energy Sales Agreement between FICELCO and SUWECO.

Cua also stated that the “onerous agreement” between FICELCO and SUWECO made it difficult for other (IPP) Independent Power Provider like Santrap, Sipcor and GS Engineering & Construction to enter the power agreement in the province.

The 2nd amendment states that “Should there be additional demand of electricity in the Province of Catanduanes in the future, FICELCO shall primarily inform the SUWECO of said need in writing and the latter is obliged to provide the same”

San Isidro Village Punong Barangay, Rudy Tolentino backed Gov. Cua in his request for Congressional Inquiry. He said that the people responsible for this will not say it in public unless put into an inquiry.