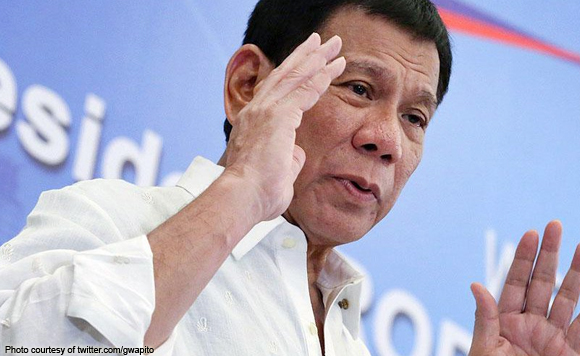 0 1,225
Share
Want more POLITIKO News? Get the latest newsfeed here. We publish dozens and dozens of politics-only news stories every hour. Click here to get to know more about your politiko - from trivial to crucial. it's our commitment to tell their stories. We follow your favorite POLITIKO like they are rockstars. If you are the politiko, always remember, your side is always our story. Read more. Find out more. Get the latest news here before it spreads on social media. Follow and bookmark this link. https://goo.gl/SvY8Kr

The Naga City government has cried foul over the claim of President Rodrigo Duterte that it was once a “hotbed of shabu.”

In a resolution, the City Council expressed “indignation” over the President’s “hotbed of shabu” remark without presenting any evidence.

Naga City is the hometown of Vice President Leni Robredo, who has been critical of the policies of the President, particularly the bloody war on drugs.

“Be it resolved, as it is hereby resolved, to express in unequivocal terms the city of Naga’s indignation over the statement of President Rodrigo Duterte that Naga City was once a ‘hotbed of shabu’ apparently uttered irresponsibly and without factual basis,” the resolution read.

The City Government said that it “cannot remain silent over this deep insult hurled against the dignity of all Nagueños.”

The local government also said that during the term of Mayor Jesse Robredo, who eventually became Interior secretary in 2010, various programs were initiated to combat illegal drugs.

“Under his watch, the city started a reward system for tipsters of illegal drug law violations which led to arrest and prosecution of drug violators. The city also implemented an anti-drug stickering program, which gained prominence even at national level,” read the resolution.

It added that under the current leadership of Mayor John Bongat, the city has continued to pursue programs aiming to eradicate illegal drugs.

The resolution was signed by Mayor Bongat, Vice Mayor Nelson Legacion and other members of the City Council.

Vice President Robredo also cried foul with the statement of the President saying it was an “insult” against all Nagueños.

Duterte’s remarks on Naga City came on the heels of a Philippine Drug Enforcement Agency report that a ton of “shabu” worth P6.8 billion slipped past the country’s customs bureau.

Duterte dismissed the PDEA report saying it was a “pure speculation.”