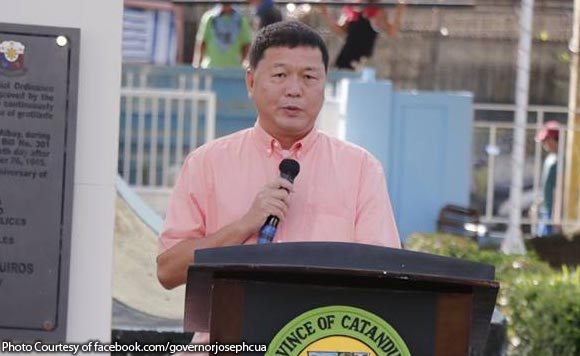 lthough he felt relieved after raps filed against him stemming from a “shabu” laboratory were dismissed, Catanduanes Governor Joseph Cua still expressed concerns on the impact of the cases to the province.

“Indeed we came out as victors. However, the damage it caused to the province can never be forgotten. Instead of working together to find the culprit, it caused division because of politics,” Cua said.

The governor said that he welcomed the cases “with an open hand” to clear the doubts of the Catandunganon and once in for all to end the long recycled propaganda thrown at him.

However, Cua admitted that to be linked with mega shabu lab and as a murderer had “impacted the psyche of his personal life unlike before.”

“I am not a drug lord, nor a killer. It affected my family gravely. But, at some point it help me to be stronger as a leader. I realized that I am not the only one affected, rather all those who believed in me,” said the governor.

The governor said that for now, his strength is the trust of the Catandunganon.

According to the province, cases against the governor were dismissed on October 2017.

“The first case that was dismissed for the lack of merit by the Ombudsman was the complaint about violation of Section 3(e) Republic Act No. 3019, as amended, Grave Misconduct and Gross Neglect of Duty. The second was murder case of Larry Que, which was junked by the Department of Justice on lack of evidence,” said the province.