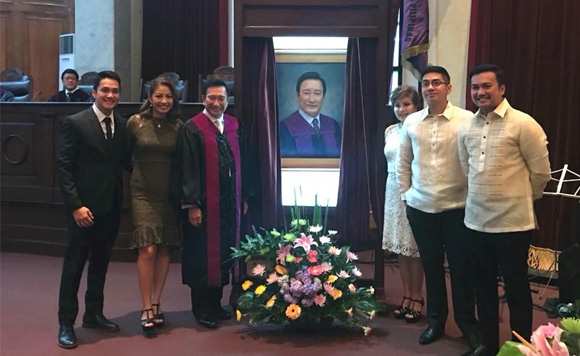 Justice Presbitero Velasco has retired after a lengthy career in the judiciary, and his son couldn’t be prouder of all he had achieved.

Marinduque Rep. Lord Velasco touted his father’s many accomplishments as he congratulated him upon his retirement as magistrate.

Lord said his dad is his idol for many reasons: he is a devoted family man, and an exemplary lawyer who chose to use his gifts for public service.

He said his father penned sharp poneneicas that show his commitment to justice; worked hard to clear his docket; fought for social justice as s he contributed to the IBP legal aid program; and led the bar examinations that saw a record high passing rate.

Because of all these, he is grateful to his dad for the service he gave to the country.

Will the son continue his father’s legacy?

“To my idol – a devoted family man and an exemplary lawyer who has devoted his prime years to public service;… whose sharp ponencias demonstrate not just his mastery of the written laws but a deeply ingrained commitment to serving justice and the upliftment of the Filipino Nation;… whose hardwork is evidenced in deciding all the judicial cases assigned to his docket as well as disposing all his administrative and disbarment cases;… whose legal expertise affirms the principles of social justice with his significant contribution to the IBP legal aid program and the rule on community legal aid service for new lawyers;

… who successfully chaired the 2016 bar examinations which set one of the highest passing percentage of 59.6% and produced a total of 3,747 bar passers;THANK YOU FOR THE SERVICE YOU HAVE RENDERED TO OUR COUNTRY! I CONGRATULATE YOU ON YOUR SUCCESSFUL STINT IN THE SUPREME COURT! 👏🏼HAPPY BIRTHDAY PAPA! 🎂 WISHING YOU MORE POWER AND SUCCESS IN ALL YOUR FUTURE ENDEAVORS!” Lord posted on Facebook.