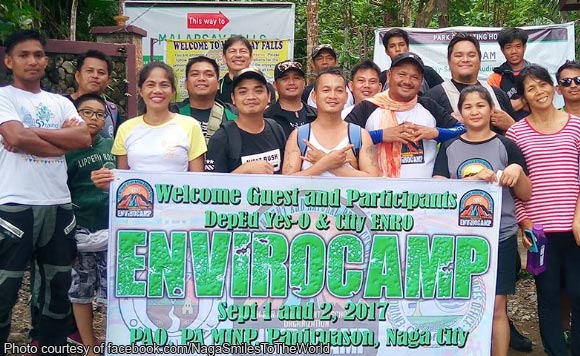 Sangguniang Kabataan chairmen and students of the City College of Naga are set to join this year’s Envirocamp 2018.

The Envirocam 2018 focuses on “holding of concrete action planning about the community-based disaster management of the city’s 27 barangays.”

The city government also said that City Environment and Natural Resources Office (City ENRO) aims to include climate change mitigation and disaster risk reduction agenda in the priority programs of the SK in the city.

“[T]he activity will also serve as a facility to enhance the participants’ awareness on biodiversity conversation aside from allowing the participants to see the many potentials of Mt. Isarog Natural Park (MINP) as ecotourism training site and conservation management area,” the city government said.

The Envirocamp will be held at the Protected Area Visitors Building at MINP in Barangay Panicuason on August 18-19.

According to the city government, Engr. Alexander N. Caning, City ENRO chief, opted to hold the activity with the students and SK leaders “because they believe in youth as effective agents of change”

CJ Zantua, ENRO senior environmental management specialist, meanwhile said that the participants “will be guided to identify approaches on how they can take a pro-active role in promoting environmental care and protection.”