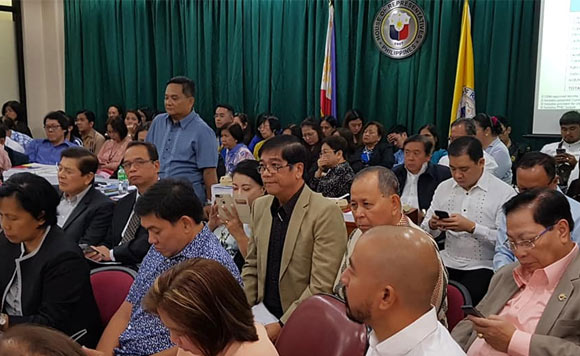 0 477
Share
Want more POLITIKO News? Get the latest newsfeed here. We publish dozens and dozens of politics-only news stories every hour. Click here to get to know more about your politiko - from trivial to crucial. it's our commitment to tell their stories. We follow your favorite POLITIKO like they are rockstars. If you are the politiko, always remember, your side is always our story. Read more. Find out more. Get the latest news here before it spreads on social media. Follow and bookmark this link. https://goo.gl/SvY8Kr

The House of Representatives was rocked by the leadership row that saw Pampanga Rep. Gloria Macapagal Arroyo wrest the speakership away from Davao del Norte Rep. Pantaleon Alvarez, but that doesn’t mean work comes to a stop.

Catanduanes Rep. Cesar Sarmiento continues to coordinate with various government agencies to push for programs and projects for his home province.

The budget season has begun, and it is now the perfect time to ensure that key projects are funded in next year’s appropriations.

Sarmiento wants to make sure his province won’t be left behind, according to the Catanduanes Serbihan page, which shared photos of the lawmaker in action.

The House leadership may have changed, but there remains a lot to be done.

VP Leni meets Tony in virtual conference about the pandemic