El Nido under state of calamity 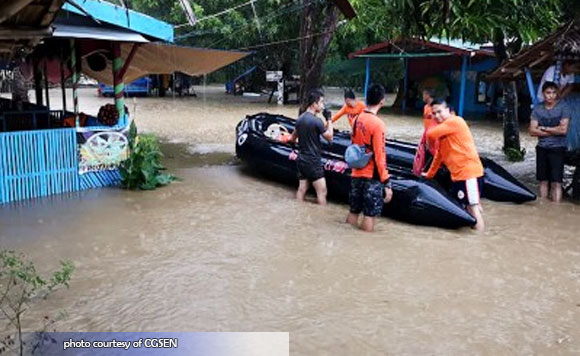 PUERTO PRINCESA CITY, Palawan – El Nido, Palawan has been placed under a state of calamity after the number of its flooded barangays rose to eight, an official said Saturday morning.

The state of calamity was declared on Friday through a resolution approved by the Sangguniang Bayan – upon the recommendation of Mayor Nieves Rosento and the municipality’s disaster risk reduction and management office, said Jerry Alili, chief of Palawan’s Provincial Disaster Risk Reduction and Management Office (PDRRMO).

He told Philippine News Agency (PNA) that the number of flooded barangays rose from five on Friday to eight due to non-stop light to heavy rains since Thursday evening.

“There were evacuees, but some of them have slowly returned to their homes since rain is no longer heavy like Thursday night and Friday. We have figures, but these are not confirmed because we are still waiting for barangays officials to send us their reports,” said Alili.

The Coast Guard Substation El Nido (CGSEN), under Ensign Harvey Marmol, also reported that they have deployed a response team early Saturday to Barangay New Ibajay, where the flood has been waist-deep since Friday morning.

This was because of stranded residents, tourists, and tour guides they saw waving and asking for help.

They successfully helped five stranded tourists and three tour guides in Nagkalitkalit Falls in Pasadena and provided assistance to about 40 tourists who were also stranded on Nacpan Beach, Barangay Bucana, due to a bridge that was destroyed by the flood.

In New Ibajay, the CGS aided an estimated 60 evacuees, whose homes had been waterlogged, in a temporary shelter.

“All rescued tourists and residents are in good physical condition and were directed to the Municipal DRRMO,” the CGSEN report said.

Alili noted the road at Zones 2 and 3 of Bucana were impassable as of 7:25 a.m. Saturday, two houses and a boat had been washed away in Calitang also in Bucana, the road between Barangay Sibaltan and Barangay San Fernando was inaccessible, and a water irrigation collapsed in Barangay Barotuan.

“Right now, clearing operations are ongoing to remove fallen trees and other debris to make them passable,” he said.

He added that 30 other PDRRMO and Rescue 165 personnel brought with them 300 food packs for distribution to affected families, heavy equipment, a rescue vehicle with rubber boats, and additional speedboats.

Alili said the flooding had taken residents by surprise as they only expected it to happen during typhoons.

“We have ambulances too, with us, for any emergency. People here were surprised since they only expect this kind of flooding when there are typhoons. They didn’t realize that continuous heavy rains for two days or more can cause floods in their areas,” added Alili.

Since Friday, the Bantay El Nido (BEN) has been calling on Palaweños and concerned relief agencies to send food and other relief supplies to residents displaced by the flooding.

Aram dela Cruz, its founder, said he has been making requests for rice, noodles, used clothing and other forms of assistance for the evacuees since Friday on his social media account, which has gained attention.