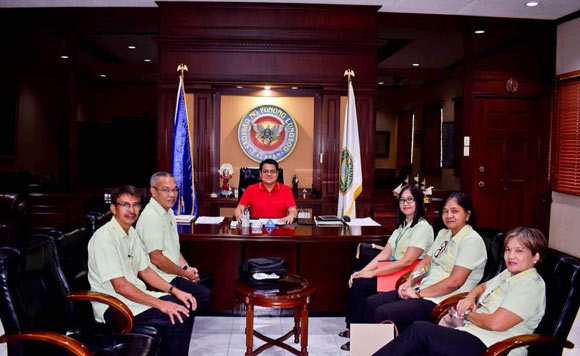 0 1,291
Share
Want more POLITIKO News? Get the latest newsfeed here. We publish dozens and dozens of politics-only news stories every hour. Click here to get to know more about your politiko - from trivial to crucial. it's our commitment to tell their stories. We follow your favorite POLITIKO like they are rockstars. If you are the politiko, always remember, your side is always our story. Read more. Find out more. Get the latest news here before it spreads on social media. Follow and bookmark this link. https://goo.gl/SvY8Kr

The newly installed president was joined by the other officials of the college when he visited Panaligan in his office at the City Hall.

“The City Government of Calapan under Mayor Panaligan and MinSCAT has a long history of collaboration,” the office said.

It added that City Government has sent many scholars to study in the three campuses of MinSCAT.

“Recently, the City Government turned over to the Calapan City campus of the college a two-storey building for the use of Information Technology students,” Paligan’s office said.

Meanwhile, the two discussed possible joint undertakings between the school and the city government.

“Mayor Panaligan and Dr. Arago agreed to explore other areas of collaboration between their respective institutions,” said the mayor’s office.