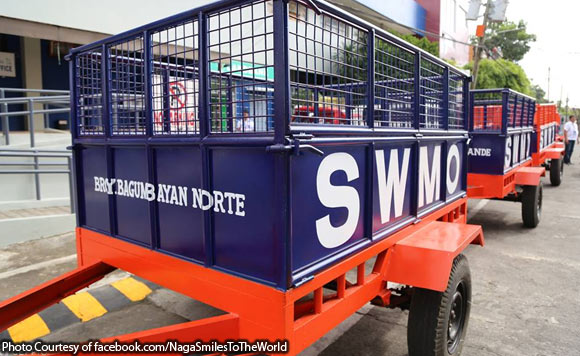 The city government, through the Solid Waste Management Office (SWMO), aims to make disposal and collection of garbage in the barangays “more convenient, organized and efficient.”

“The approach is to be undertaken by way of putting up materials recovery facilities (MRFs) in the barangays, the place where garbage originally come from and the center of garbage collection. The establishment of the facilities is expected to minimize the residual wastes being thrown at the city’s dumpsite by 50%,” said the city government.

The city said that under the RA 9003, otherwise known as “The Ecological Solid Waste Management Act of 2000,” local government units down to the barangays have a role to play in the segregation and collection of solid waste.

The four MRF were turned over to Barangay Tinago, Del Rosario, Concepcion Grande and Concepcion Pequeña.

Engr. Joel Martin, SWMO chief, said the establishment of MRF in the barangays is expected to help the city in achieving an increase in efficiency on waste segregation.

“We have a very poor compliance on waste segregation. The SWMO found out that the entire city has only 20 to 33 percent segregation efficiency,” Martin was quoted as saying.

Accordinh to the city, the construction of stationary MRF costs about P50,000 each while the price of the trailer-type has an estimated amount of more or less P85,000 each.

“The mobile MRF are to be installed in barangays that are situated in commercial or business district which do not have sufficient spaces to acquire stationary MRF like Dinaga, Tabuco, Peñafrancia, and San Francisco,” the city said.

Meanwhile, Martin said that his office aims to distribute MRFs to all 27 barangays in the city “[b]efore the Peñafrancia Fiesta this year.”