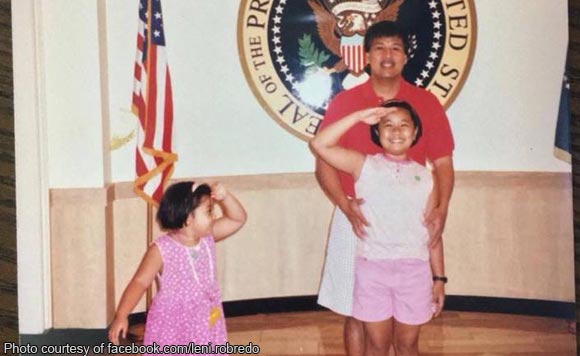 When they were younger, the Robredo kids were a part of the different aspects of Jesse Robredo’s life.

Vice President Leni Robredo unearthed some photos of Jesse recently which showed him with the young Aika and Tricia at the John F. Kennedy Presidential Library in Boston, which was where he was studying at the time.

When he became Naga Mayor, Jesse also brought his youngest Jillian to work. VP Leni said Jesse served as babysitter and would bring Jillian to the office whenever she had to go on field work.

“Scanning through old photos of Jesse tonight and saw these.

First pic was in 1998 at the John F. Kennedy Presidential Library in Boston. Aika was 10, Tricia was 4. That’s Jillian with Jesse in the second picture taken at the Mayor’s Office at the Naga City Hall. Jillian must have been around 3 at that time. Whenever I go on field work, Jesse would bring Jillian with him to the office,” Robredo posted.