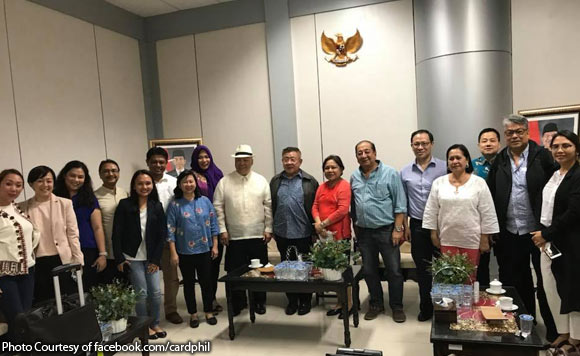 0 452
Share
Want more POLITIKO News? Get the latest newsfeed here. We publish dozens and dozens of politics-only news stories every hour. Click here to get to know more about your politiko - from trivial to crucial. it's our commitment to tell their stories. We follow your favorite POLITIKO like they are rockstars. If you are the politiko, always remember, your side is always our story. Read more. Find out more. Get the latest news here before it spreads on social media. Follow and bookmark this link. https://goo.gl/SvY8Kr

The Philippine delegate had the chance to visit the Cargill’s Cocoa Promise Project Site in Jakarta.

Senator Villar said that they had a “very insightful and informative” talks with Cargill, noting that the Philippines has a “very good advantage” in cacao farming.

“I filed Senate Bill No. 320 or the ‘Cacao Industry Development Act,’ aimed at establishing a national program for the cacao industry to enhance the competitiveness of Filipino farmers,” Senator Villar said.

“The Philippines’ current cacao production levels are not even enough to meet local demand,” she added.

“Global demand is expected to reach 4.7 million to five million MT of dried cacao beans by 2022. We can seize those market opportunities,” said the Senator.

Villar said that Cargill works alongside farmers, producers, manufacturers, governments, and other organizations on safe and sustainable agriculture for communities.