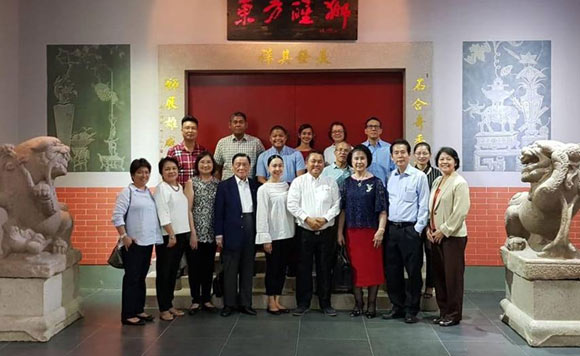 It’s not just President Duterte who’s determined to forge a friendship with China.

Shi Shi is Naga’s sister city and the hometown of the ancestors of many Filipino-Chinese in the country, including those in Naga. Bongat credited the Filipino-Chinese community for its role in the economic development of his city and of Naga.

The mayor is all too happy to boost ties with Shi Shi, which has agreed to send its experts in table tennis, badminton, and gymnastics to help young local athletes in Naga. It also also vowed to provide assistance in establishing Naga’s City Museum.

Territorial disputes aside, the Philippines and China can find ways to develop a beautiful friendship!

“HELLO PHILIPPINES AND FACEBOOK! We’ve just landed in Manila, after 3 days of official, sponsored trip to Facebookless China, upon invitation of Naga’s sister city in Fujian Province, the very progressive, industrialized City of Shi Shi, ranked 16th in China in terms of GDP. Shi Shi, China’s lion city, is hometown of the ancestors of many successful, present generation Filipino-Chinese, including our brother Chinoys in Naga, who have played a major role in the country and Naga’s economic development. The officials of the Shi Shi Townmate Association of the Philippines, headed by chairman emeritus Antonio Tan and President Fernando Co, was a success. Shi Shi government has agreed in principle to send their experts in table tennis, badminton and gymnastics to help our young, local athletes become world class competitors, and to provide some technical assistance in the establishment of our own city museum!” Bongat posted.