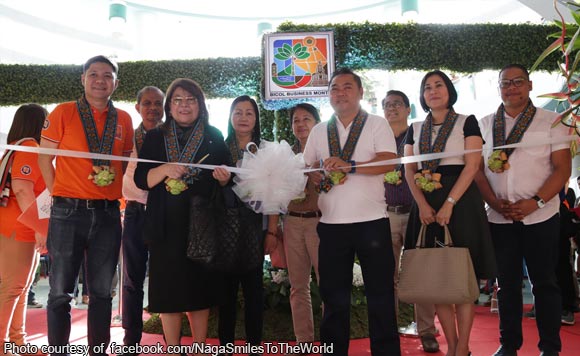 0 1,012
Share
Want more POLITIKO News? Get the latest newsfeed here. We publish dozens and dozens of politics-only news stories every hour. Click here to get to know more about your politiko - from trivial to crucial. it's our commitment to tell their stories. We follow your favorite POLITIKO like they are rockstars. If you are the politiko, always remember, your side is always our story. Read more. Find out more. Get the latest news here before it spreads on social media. Follow and bookmark this link. https://goo.gl/SvY8Kr

This year’s Bicol Business Month (BBM) has officially kicked off last July 5, which was marked by an exhibit and trade fair in one of the biggest shopping centers in Naga City.

This year’s BBM carries the theme: ‘Bigger, Better and More!’.

According to the City, the BBM is a yearly activity of the Metro Naga Chamber of Commerce and Industry (MNCCI) that “aims, for one, to promote the businesses of the Micro, Small, and Medium Enterprises (MSMEs) in the Metro Naga.”

Naga City Mayor John Bongat said that the business enterprises contribute largely in the economic dynamism of the City, which makes it land on top among the Most Competitive Component Cities in the country.

“Mayor Bongat has always been thankful to good collaboration and relationship existing between and among the government agencies and the business sector in Naga City and the surrounding municipalities as mirrored by the Bicol Business Month celebration— ensuring much better opportunities in the growth of the business sector within Metro Naga,” the city said.

Alegria Limjoco, the President of the Philippine Chamber of Commerce and Industry (PCCI), was present during the opening ceremonies of the BBM 2018.