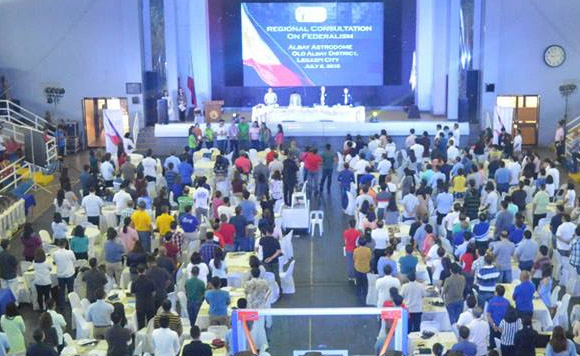 The Provincial Government of Albay has opened its doors for a regional consultation on federalism yesterday at the Albay Astrodome.

Governors, congressmen, mayors, regional directors, barangay Captains and councilors and representatives from other government units and others sectors in Bicol Region attended the consultation.

“Governor Al Francis showed his full support in Federalism during his message and expressed that we are lucky to have Duterte as the President,” said the provincial government.

Atty. Ubalde-Ordinario explained the neeed to revise the constitution as she showed facts and realities that contribute to the reasons on why to amend the 1987 charter.

Atty. Arellano, meanwhile discussed the reforms in the areas of federalism. “The power is with us, the sovereign Filipino of the Philippines”, he pointed out.

On the other hand, Tayao “presented the comparative-analytical approach to the distribution of powers in federalism. Decentralization was used as a key strategy. Federated regions are geared towards increased economic viability.”

Prof. Alih talked about the importance of Federal Transition Commision for the orderly transition of the government.

After their discussion, an open forum was conducted for further questions and clarifications.