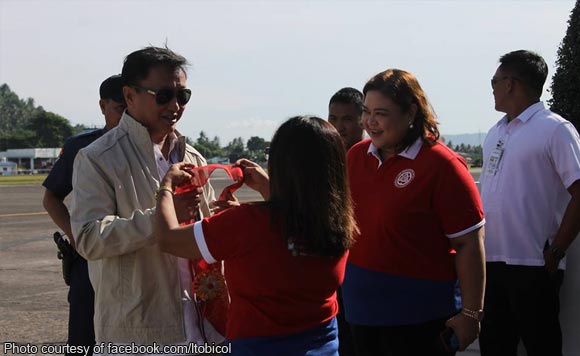 Presidential Adviser on Political Affairs Secretary Francis Tolentino together with Governor Al Francis Bichara, Board Members of the Provincial Government of Albay, dealers from the different auto companies, transport sectors, and DTOR members were present to witness the roll out of the newly designed plates.

“Matagal po nawalan ng plaka ang LTO. There were legal concerns during the procurement process that needed to be addressed, but today we end the plate drought”, Regional Director Noreen Bernadette S. San Luis-Lutey of LTO-V said during her message.

She also said that the plates are on hand and ready for distribution to different motor vehicle owners.

“Ito pong gingawa natin ngayon is a vindication of the former LTO Chief, Virgie Torres… and a promise fulfilled by the Duterte Administration”, he added.

Meanwhile, Governor Bichara opened the issue regarding widened roads used as parking space that causes traffic from Legazpi to Naga.

Motor Vehicle Plates that are available pertain to those which are registered from July 1, 2016, to December 31, 2017.

“The upgraded plates include the Radio Frequency Identification (RFID) Stickers, security features in LTO Logo and QR Code intended to positively identify vehicles. They have also reverted to the previous Alpha assignment for each region. Region V was assigned to Alpha letter “E”. This is to identify vehicles on the road and know to which region it was registered,” the province said.

However, the provincial government said that plate numbers are only available for the meantime to motor vehicles.

“Motorcycle plate numbers will be released when the congress already finalizes the proposal for the change of design,” it added.