Bicol can stand on its feet in federal government – Concom 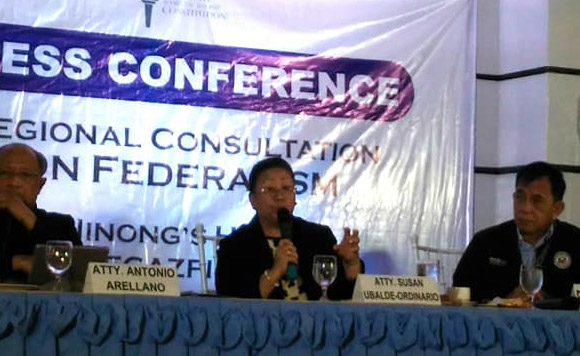 A Bicolana lawyer, who is the lone female member of the Consultative Committee (ConCom) tasked to review the 1987 Constitution, believes that Bicol can “stand alone” as a federated region under a Federal Republic.

“Yes, Yes, Yes, Bicol can stand… economically. The only reason why Bicol is poor is we are so constrained by the central concentration of power by the central government,” ConCom member and lawyer Susan Ubalde-Ordinario said in an interview with the Philippine News Agency (PNA) on Thursday.

She said with the central concentration of power, the central government dictates what would happen to the regions.

“Sila ang nagsasabi kung ano mangyayari sa atin, tingnan mo ang ating (They are the ones who determine what will happen to us, look at our) Internal Revenue Allotment (IRA). We are not getting the full 40 percent, we’re only getting 18 percent as a region, ang laking deperensiya non (there’s a big difference there),” Ordinario said.

Under the proposed federal Constitution, each federated region will have an equal share in the 50 percent of all the collected taxes on income, excise, VAT (value-added tax), and customs duties.

This, according to Ordinario, will double the region’s IRA share, unlike today when they are very dependent only on income tax.

Citing the draft Constitution, the ConCom member said economic reforms “would break up monopolies, cartels and other structures that distort markets and prevent fair competition.”

“There will be economic liberalization that will spur and spread economic growth and development, create opportunities, income and wealth,” she added.

The ConCom has also proposed the establishment of an Equalization Fund, which is 3 percent of the annual General Appropriations Act (GAA), to be given to the federated regions.

Under the ConCom proposal, the Equalization Fund shall be given to regions that need it most, in those that require financial help to become viable and economically sustainable.

The lawyer also said that federated regions can better attract investors if they are well-managed; corruption is reduced; there is increased access; infrastructures are maintained; power, water and all the utilities are provided efficiently; the government responds to the needs of the people; and peace and order are sustained.

The ConCom will submit the draft Constitution and accompanying report to President Rodrigo Duterte on Monday (July 9), after which, he will submit it to Congress, which in turn, will convene as Constituent Assembly to review and finalize the new Constitution.

The adopted Constitution will be submitted to the people for ratification in a plebiscite. (PNA)