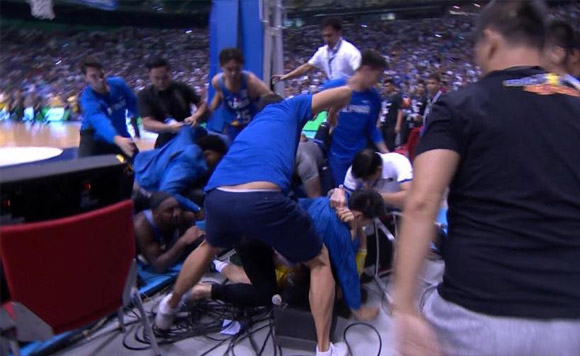 San Fernando, Camarines Sur’s first lady Michelle Mabulo thinks the pinoys who have bashed the Duterte administration are responsible for the brawl between the Philippine and Australian basketball teams during the recent FIBA game.

In a post, the wife of San Fernando Mayor Fermin Mabulo said trashing your government on mainstream or social media is like trashing it in eyes of other countries.

In other nations, citizens grow up loving their motherland, Michelle said. She knows whereof she speaks because she used to live in a country where there is a monarchy, she said.

A country is like a family, she said, because when you speak against one, it reflects on the whole clan.

Still, she said Australia’s arrogance against the Philippines was unacceptable and called on its players to respect the country.

Are the dilawans to blame?

“Looking at this FIBA brawl Pilipinas vs Australia, makes me think that this is the result of trashing your government. Trashing your government (thru mainstream/social media) is trashing your country in the eyes of other country because that’s how they grew up loving their own. Why I know? Because I lived in the country where monarchy reigns. Where Australia is one of their commonwealth country. It’s like a family,when you speak rubbish against one it reflects the whole clan.

This is just my two cents, it may differ to your opinion.

But this act of arrogance to our country is not acceptable.

——————————-/—————ROOT CAUSE: (copied thru fb post of Manila Bulletin)-Australia, while practicing yesterday at the Philippine arena, removed the sponsor stickers from the floor of the court without authority. This pissed the SBP and treats this as disrespect.-Australia started the trash talk vs the Filipinos while warming up before the game when the PH players stepped onto the half court line while warming up.-Players from Australia were trash talking the Filipino players every time they take free throws. RR Pogoy had enough of it and intensionally fouled an Ausie player, promtping that player to kick him, and promting Andre Blatche to return a punch to the Ausie. And the rest is history. Almost everyone joined the brawl.-To the Australians, this is all I can say:Show some respect, especially when you are the visitor. When we were on your home court, we never damaged the court floor, nor did we trashed talk to your players. Stop the arrogance and just play some basketball.#LabanPilipinas #history #FIBAWC #3vs8” Michelle posted on Facebook.