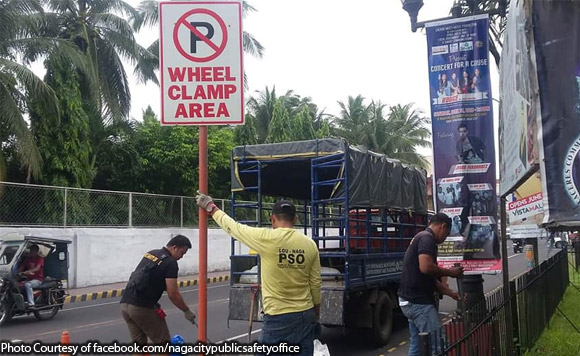 The City Government of Naga has strengthened its policy on towing and wheel clamp in hopes to maximize the use of roads.

The Sangguniang Panlungsod of Naga recently passed the Ordinance No. 2018-018 also known as ‘The Towing and Expanded Wheel Clamp Ordinance of Naga City’.

The city said that the wheel clamp areas and tow away zones for vehicles include the Panganiban Drive, Magsaysay Avenue, Roxas Avenue along Diversion Road, Peñafrancia Avenue and other streets in the CBD 1 and 2 and those along the school zones.

Moreover, roads along the circumference of the Naga City People’s Mall (NCPM) have been designated for parking space for free for the first two hours or less and a charge of P30 for the succeeding hours.

The Wheel Clamp and Towing Task Group already started putting up “informative signs on the designated wheel clamp areas, parking spaces and prohibited parking areas and the dissemination of the same before the start of the full implementation of the policy this coming month of August, 2018.”

The group is composed of Philippine National Police and Public Safety Office personnel.

“Meanwhile, the PSO has been starting to announce its invitation for interested towing service providers to apply for accreditation at the Sangguniang Panlungsod,” the city said.

“With the strengthened policy on towing and wheel clamp, the city government hopes to maximize the use of city roads, streets, alleys and parking spaces to help ease the traffic situation in the city,” it added.