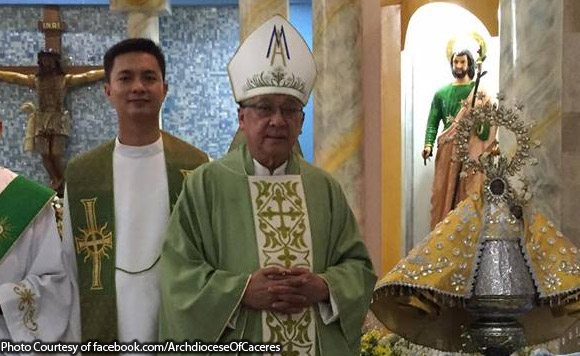 0 1,427
Share
Want more POLITIKO News? Get the latest newsfeed here. We publish dozens and dozens of politics-only news stories every hour. Click here to get to know more about your politiko - from trivial to crucial. it's our commitment to tell their stories. We follow your favorite POLITIKO like they are rockstars. If you are the politiko, always remember, your side is always our story. Read more. Find out more. Get the latest news here before it spreads on social media. Follow and bookmark this link. https://goo.gl/SvY8Kr

The Catholic Bishops’ Conference of the Philippines (CBCP) is waiting for the results of the investigation being conducted by the Archdiocese of Caceres in Camarines Sur on the death of a 28-year-old woman where a local priest is being considered as a “person of interest”.

CBCP president Archbishop Romulo Valles said that just like the Archdiocese of Caceres, his group wanted to know the truth regarding the case.

“We support Caceres Archbishop Rolando Tirona, the priests, consecrated persons, and lay persons of the archdiocese in their quest for the truth on this very serious report so that justice may be served,” he said in a statement.

The Davao prelate said his group was “deeply troubled” that a priest, whose name is being withheld pending results of the investigation, is being alluded to in the death of Jeraldyn Rapinan.

“We offer our prayers for the victim and deep sympathy to the bereaved family,” he said.

Earlier, the Caceres archdiocese said it was conducting its own investigation on the case involving the said priest.

On June 15, Rapinan’s dead body was found dumped in a grassy portion of a road in San Fernando, Camarines Sur. (PNA)