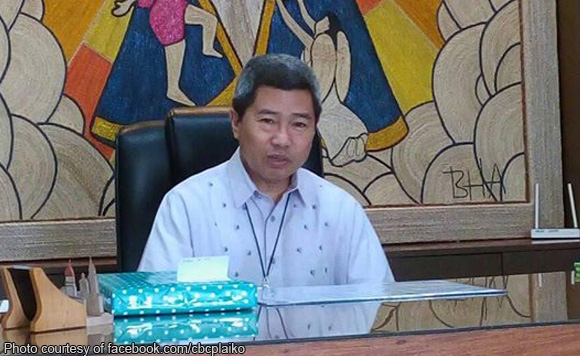 0 2,664
Share
Want more POLITIKO News? Get the latest newsfeed here. We publish dozens and dozens of politics-only news stories every hour. Click here to get to know more about your politiko - from trivial to crucial. it's our commitment to tell their stories. We follow your favorite POLITIKO like they are rockstars. If you are the politiko, always remember, your side is always our story. Read more. Find out more. Get the latest news here before it spreads on social media. Follow and bookmark this link. https://goo.gl/SvY8Kr

A top Catholic Church clergy in Albay has rejected the proposal to arm priests for protection following the shooting to death of his three fellow clergymen.

Bishop Joel Baylon of the Diocese of Legazpi, in a text message to the Philippine News Agency on Wednesday, said a priest is a man of peace, and carrying arms contradicts that idea.

“No, I don’t agree with the idea of priests arming themselves,” he said.

Baylon, in justifying his claim, said Jesus himself rebuked the apostle Peter when the latter drew his sword and struck one of those who came to arrest Him.

The bishop said that a violent act, even if it is in self-defense, will never stop violence. He shared the quote: “If you want peace, prepare for war. Si vis pacem para belleum.”

He also quoted John 14:27: “Peace I leave with you; My peace I give to you; not as the world gives do I give to you. Do not let your heart be troubled, nor let it be fearful.”

Other clergy officials also rejected the proposal to arm priests.

In an interview, Father Rex Arjona, executive director of the Social Action Center (SAC) of the Diocese of Legazpi, when asked to comment on reports that priests in Laguna are secretly acquiring firearms following the killings of three clergymen and the frustrated murder of a fourth, said: “This issue is no longer new, citing a law passed during former President Benigno Aquino’s administration allowing judges, government prosecutors, media as well as priests to own and bear firearms for protection.”

He, however, said, “Personally, I still believe in a gun-less society, let’s leave it to the police and the military for them to carry guns as they are mandated to maintain peace and order.”

Father Ricardo Barquez, a town parish priest, said: “My personal take on the issue is I am not in favor of arming priests for reason of self-defense or mitigating attacks versus them. We will just be giving all the reason to target us.”

Another priest, Father Jose Victor Lobrigo, said: “such idea is contrary to what we preach.”

Also, Father Manuel Camu said, “holiness and prayers are the armor of a priest.”

Meanwhile, bells in all Catholic churches will continue to toll every night in Albay. A series of Holy Masses and the setting up of the “Holy Hours” where the Holy Sacrament would be displayed for viewing as a show of support to the Reparatory Day launched by the Lingayen-Dagupan clergy will also be held on Monday.

Baylon said there are other activities lined up by the diocese including the reading of the pastoral letter of Archbishop Socrates Villegas during Sunday masses. The letter condemning the killing of priests was translated into the Bicol dialect and read in all 47 churches in Albay.