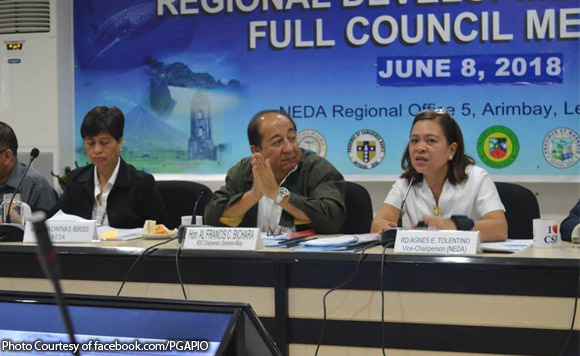 The awardees for Outstanding Local PMCs were given a cash of P20,000.

The council, chaired by Governor Bichara, discussed the CY 2017 Regional Development Report which was eventually approved after discussion.

“Tackled in CY 2017 Regional Development Report was Groundwork in 2017 including the Malasakit Pillar: enhancing the social fabric ensuring a people-centered, cleaned and efficient governance, pursuing swift and fair administration of justice, and promoting PH culture and values,” the provincial government of Albay said.

“For the pagbabago pillar: Inequality reducing transformation ; CY 2017 recorded growth in agriculture sector expanded by 2.8%, fishery expanded by 2%, Industry expanded by 3.6% and services expanded by 6.5%. To reduce inequality of individuals and families there is a 100% coverage of social pension, and 83% Philhealth coverage,” it added.

“Foundations for sustainable development ensuring security, public order, & safety, 66 out of 120 LGUs has approved localized and anti-crime section plans. While to accelerate infrastructure development, there is 99% energization rate: 77% sitio energization rate. Continuous upgrading of airports, seaports and facilities are also being done,” it also said.

Another agenda tackled was the RLUC Resolution No. 1-02 on Mayon Volcano 6-km Permanent Danger Zone with other recommendations which were eventually approved for endorsement to the Sangguniang Panlalawigan ng Albay.