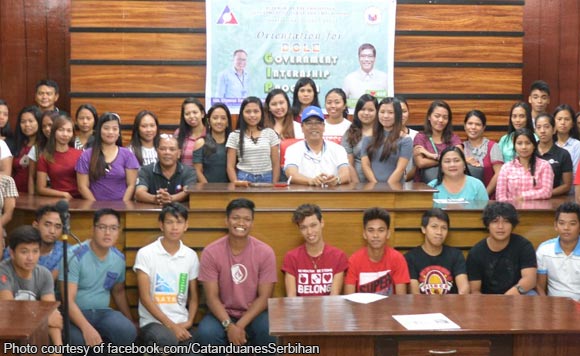 The Office of Catanduanes Rep. Cesar V. Sarmiento has recently conducted an orientation for 100 fresh graduates who have been hired under the Labor department’s Government Internship Program.

“The Congressional District Office of Cong. Cesar Vergara Sarmiento, jointly with the Provincial Field Office of DOLE in Catanduanes led by its Chief Mr.conducts an orientation to one hundred (100) fresh graduates coming from all over the lone district of Catanduanes who have been hired for the program,” Sarmiento’s office said.

The orientation was held last June 1 at the SP Session Hall with Vice-Gov. Shirley Abundo.

Sarmiento said that the government program is important especially that o lot of fresh graduates prefer working in the government.

“Here, Cong. CS stressed the importance of the government program as more and more of our kababayans after earning diplomas prefer to be employed in the government service,” the office said.

“The GIP, together with other programs of DOLE like TUPAD and the Pangkabuhayan thrusts of the agency, is given additional funding every year through the initiative of Cong. CS,” it added.

Sarmiento said that the program complements the other projects of the national government.

“This actually complements the programs like those of TESDA, DSWD, etc., which are intended to help our people in their livelihood pursuits and which I also continue to lobby with the DBM to be given more budget every year,” Sarmiento was quoted as saying.