VP Leni the vlogger takes you on a tour of Cambridge 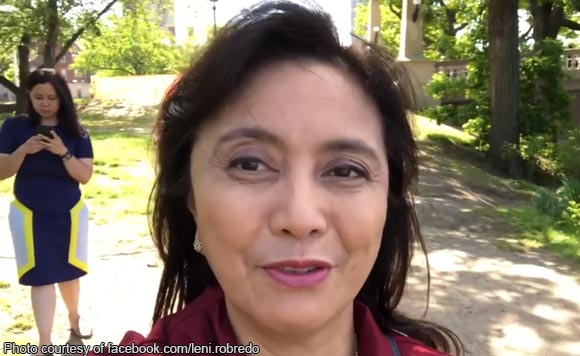 Vice President Leni Robredo’s recent visit to the United States for her daughter Aika’s graduation from Harvard University was also a trip down memory lane, and this time, she made sure to capture everything on video.

Two decades ago, it was Jesse Robredo who was a Harvard student, and his family lived there with him.

This time, the VP chronicled her brief stay in the area through her first try at vlogging.

In her video, edited by her youngest Jillian, Robredo showed the same places where she and her hubby stayed and strolled and where her then young kids went to elementary school. She reminisced about their activities there and the sights they used to see.

It was by no means a slick production, just a two-person effort between the VP and AIka. In fact, several of the shots were shaky and she wasn’t looking at the camera in some instances, she noted.

But she spoke clearly and coherently all throughout, and looked like she was having fun every minute!

“Took several days off from work to be a full time Mom to Aika in Cambridge during Commencement Week. They had Commencement Exercises almost everday (Mason Program, School-wide, University-wide, etc) and I attended each and every event. In between, she brought me around the different Harvard Colleges and we visited our old haunts, the ones we usually went to when we lived there 20 years ago, when Jesse was the student.

I do not know when we will have the privilege of visiting again so I decided to record everything on video for posterity. I do not know how to take selfies, much more to do vlogs. But this is my attempt, much to the embarrassment of my children.

Thank you to Jillian who edited my videos. What was left was just 10%, I think, of the original because Jillian said I spoke too much and my hand was too shaky most of the time. So, apologies if this makes you dizzy. Apologies also for my mahangin-look and for not knowing where the camera lens is ,” she said.

VP Robredo unleashes the k-drama fangirl in her