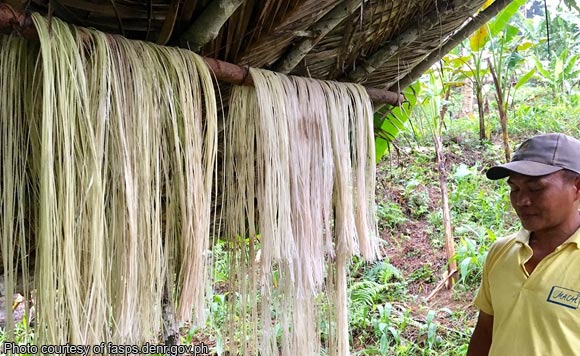 0 1,374
Share
Want more POLITIKO News? Get the latest newsfeed here. We publish dozens and dozens of politics-only news stories every hour. Click here to get to know more about your politiko - from trivial to crucial. it's our commitment to tell their stories. We follow your favorite POLITIKO like they are rockstars. If you are the politiko, always remember, your side is always our story. Read more. Find out more. Get the latest news here before it spreads on social media. Follow and bookmark this link. https://goo.gl/SvY8Kr

A total of 107 abaca farmers from two towns in Catanduanes whose plantations were damaged by Typhoon Nina received their received their “Cash for Work” incentives from the funds provided by the Department of Agriculture.

Farmers from Bato and Baras received their incentives during the Abaca Farmer’s Day held last May 26 at the Convention Center, Provincial Capitol Compound in Virac.

“This is the second time in two months that the provincial government released cash incentives to the abaca farmers,” said the province.

The first tranche was released last April with 81 abaca farmers.

“These abaca farmers were formerly monitored and validated by the Philippine Fiber Industry Development Authority (PhilFIDA) regular technicians, municipal abaca focal persons and technicians from the Office of the Provincial Agriculturist (OPAg) in coordination with the Provincial Government covered by its ₱5 million counterpart,” said the province.

“The abaca farmers presented their identification card, community tax certificate and other documents to claim their cash incentives,” it added.

Meanwhile, Governor Joseph C. Cua explained that said that they cannot just speed up the release of the funds since “there should be a systematic process that should be followed in giving the cash incentives to the abaca farmers.

He added that the release should be monitored and validated by the PhilFIDA and the responsible agencies.

“The local chief executive emphasized the high demand of abaca abroad and lesser production of abaca in our country due to the manual stripping. He expounded the benefits of the mechanized abaca stripping and also gave gratitude for the PhilFIDA as well as to the DA for the ₱50 million abaca rehabilitation fund,” said the province.