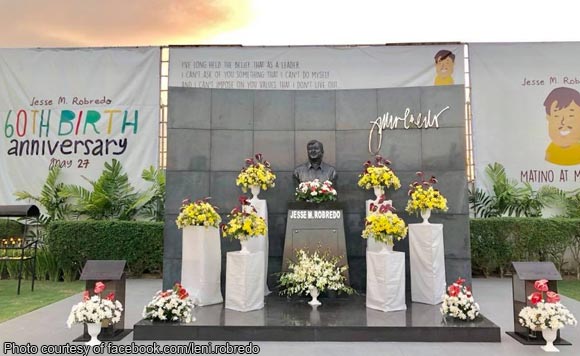 The Vice President also led the opening of an art exhibit in a museum named after his husband Jesse Robredo Museum.

“Back in Naga [yesterday] morning to commemorate Jesse’s 60th birthday with a Mass, followed by the opening of the “Para Kay Jesse” exhibit at the Jesse Robredo Museum,” she said.

VP Leni said that this year is special for Jesse, who served as a mayor of Naga, as he would have been a senior citizen this year.

“This would have been quite a year for my husband—senior citizen na siya!,” she said.

She added that it is also “extra special” as their daughters also achieved milestones in their lives.

“It’s extra special as our daughters celebrate their own milestones in time for their Papa’s birthday: Aika has earned her master’s degree at Harvard, Tricia is one step closer to becoming a doctor as she starts clerkship, and Jillian is graduating from high school,” Leni said.

“I’m sure these would have made him so proud,” she said.

The Vice President also thanked the people who joined them in celebrating the event.

“We would like to thank everyone who celebrated with us today. Was particularly touched with the City Government’s gesture to give Jesse a symbolic Senior Citizen’s ID. Nakakatuwang isipin kung ano sanang ginawa niya sa discounts,” said the Vice President.