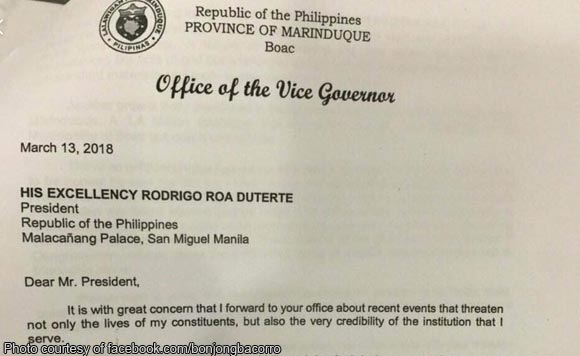 0 1,540
Share
Want more POLITIKO News? Get the latest newsfeed here. We publish dozens and dozens of politics-only news stories every hour. Click here to get to know more about your politiko - from trivial to crucial. it's our commitment to tell their stories. We follow your favorite POLITIKO like they are rockstars. If you are the politiko, always remember, your side is always our story. Read more. Find out more. Get the latest news here before it spreads on social media. Follow and bookmark this link. https://goo.gl/SvY8Kr

Marinduque Vice Gov. Romulo Bacorro is livid at the people of trapos who he accuse of being behind a fake letter to the Office of the President that was made to appear to have come from him.

The letter was telling Malacanang about events that threaten the lives of Marinduque residents and the credibility of the local government.

Bacorro said the people behind these were trying to create conflict where there was none, and they failed because their photoshop skills were poor.

What gave them away was their failure to copy his logo perfectly, he said.

While he is fuming mad over this, he said he will let karma do its job.

“Warning to all public servants :