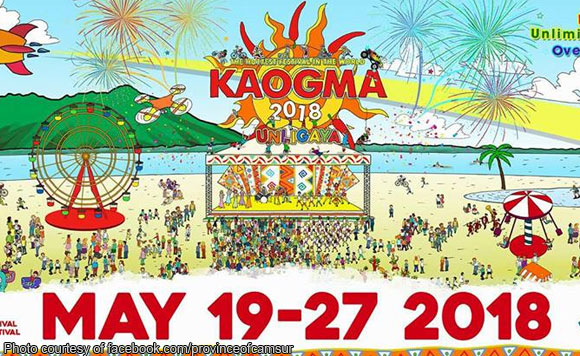 0 3,465
Share
Want more POLITIKO News? Get the latest newsfeed here. We publish dozens and dozens of politics-only news stories every hour. Click here to get to know more about your politiko - from trivial to crucial. it's our commitment to tell their stories. We follow your favorite POLITIKO like they are rockstars. If you are the politiko, always remember, your side is always our story. Read more. Find out more. Get the latest news here before it spreads on social media. Follow and bookmark this link. https://goo.gl/SvY8Kr

The Province of Camarines Sur has already slated series of fun and exciting activities for the celebration of the Kaogma Festival 2018.

The Kaogma Festival, dubbed as the “hottest festival in the world” will officially open on May 19 until May 27.

First activity on the 19th will the the CamSur Grand Zumba Kontra Droga to be held at the Kaogma Grounds at 4 pm to be graced by actress Sunshine Cruz, rapper Andrew E. and actress and dancer Yassi Pressman.

The Streetdance Competition, meanwhile, will happen on May 20 to be held at the Freedom Sports Complex in Pili.

The First Grassroot Triathlon in Philippine History will happen on May 20 at the CamSur Watersports Complex.

On May 21, the Senior Citizen’s night will be held. The following day, on May 22, a Dance Revolution will be happening.

A dog show will be held on May 22 to 23 and a basketball 3×3 tournament will be held featuring PBA star James Yap.

A singing contest will be held on May 24 to be attended by singer Moira Dela Torre.

Meanwhile, on May 25, a new Miss Kaogma will be crowned.