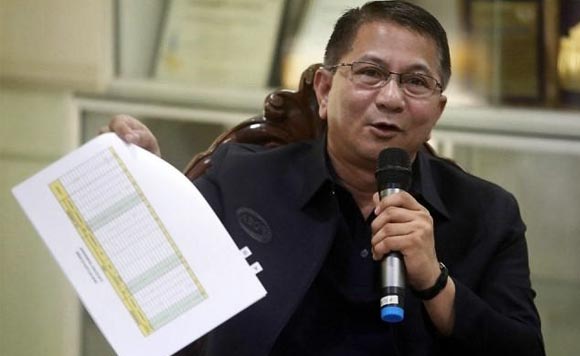 0 2,592
Share
Want more POLITIKO News? Get the latest newsfeed here. We publish dozens and dozens of politics-only news stories every hour. Click here to get to know more about your politiko - from trivial to crucial. it's our commitment to tell their stories. We follow your favorite POLITIKO like they are rockstars. If you are the politiko, always remember, your side is always our story. Read more. Find out more. Get the latest news here before it spreads on social media. Follow and bookmark this link. https://goo.gl/SvY8Kr

The Philippine Drug Enforcement Agency (PDEA) is set to file charges against the 207 barangay (village) officials included in President Rodrigo Duterte’s ‘narco list’ or those allegedly involved in the illegal drugs trade.

PDEA Director General Aaron Aquino said the would file charges against the officials on the list, which include 90 barangay captains and 117 barangay kagawads, in a “week or two.”

Bicol Region has the most number with 70 barangay officials, followed by Caraga (Region 13) with 34, Autonomous Region of Muslim Mindanao with 13 and in National Capital Region (NCR) with 12, from Caloocan, Malabon, Manila, Mandaluyong and Quezon City.

“Some of the officials in the list are users, some are pushers, some are even drug lords, but most are protectors,” Aquino told reporters during the press conference together with officials from the Department of the Interior and Local Government (DILG).

Aquino said the announcement of ‘narco list’ was made ahead of the May 14 Barangay and Sangguniang Kabataan (Youth Council) elections for the public to determine who they are going to vote in their respective barangays.

“Public office is a public trust. The public officials are accountable to the people. In every community, there is a right to know the doings of the barangay officials. It’s fair enough for the people to know what particularly the official is doing,” the PDEA chief stressed.

“This announcement is also supposedly a guide the public on who to vote for in the upcoming election. For them to be aware and vigilant to choose properly; to elect the candidates who are active on anti-illegal drug campaign and not to vote on people who were involved in illegal drugs,” he added.

Aside from the 207 names in the list, Aquino said another 274 barangay officials were being validated for alleged involvement in illegal drugs.

Once the validation is completed, PDEA will also be revealing the names of these officials.

“The disclosure of valuable and valid information is needed to curtail and minimize corruption amongst officials of the government, to promote the highest standard of honesty in public service and to elevate morality in public administration,” he added.

He noted the list has been validated by four law enforcement intelligence agencies of the country.

“There’s no truth that this will serve as a hit list. We want to be legitimate in our operations, we want our operations to be transparent,” Aquino said.

For his part, DILG officer-in-charge Eduardo Año announced the filing of charges against barangay officials with no organized barangay anti-drug abuse council (BADAC).

On the part of the DILG, they issued four memorandum circulars (MCs) enjoining all barangays to create and revitalize the local anti-drug abuse councils (ADACs).

The said MCs were reinforced by two regulations issued by the Dangerous Drug Board (DDB) specifically to urge the barangays to organize their respective BADACs. This regulation directs all barangays in every LGU to establish their own BADAC and states that “failure of government employees and officials…shall be ground for filing of appropriate charges in accordance with existing laws, rules and regulations.”

At present, there are still 16 barangays in the country which have not yet organized their BADACs. Of the 16 barangays, 11 barangays are in the Bicol Region –10 in the town of Aroroy, Masbate and one in Gubat, Sorsogon while the remaining five are in the National Capital Region, all belonging to the city of Manila.

On Monday, the DILG filed administrative charges against the five barangay officials in Manila at the Office of the Ombudsman for misconduct of office or dereliction of duty pursuant to Section 60 of the Local Government Code of 1991.

Año said barangays should have submitted their BADAC action plans to the concerned DILG offices and should have implemented programs, projects, or activities listed in their action plan.

“We are filing charges against barangays with no BADACs, because we want to send a strong message to the barangays on their important role in the anti-illegal drug campaign.” Año said.

The filing of cases against the 16 barangays is just the first series of cases to be filed by the DILG.

There are still over 600 barangays with no reports on their BADACs. (With reports from Red Andador, OJT/PNA)