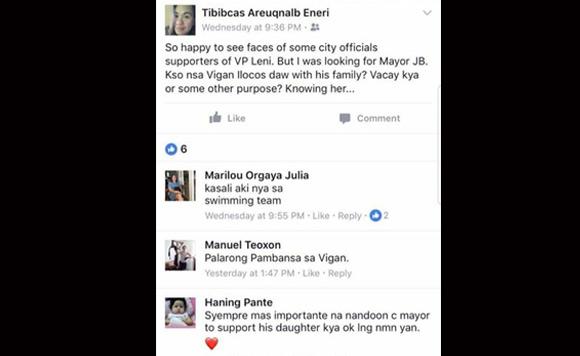 0 789
Share
Want more POLITIKO News? Get the latest newsfeed here. We publish dozens and dozens of politics-only news stories every hour. Click here to get to know more about your politiko - from trivial to crucial. it's our commitment to tell their stories. We follow your favorite POLITIKO like they are rockstars. If you are the politiko, always remember, your side is always our story. Read more. Find out more. Get the latest news here before it spreads on social media. Follow and bookmark this link. https://goo.gl/SvY8Kr

No, he did not deliberately avoid the April 18 prayer rally for Vice President Leni Robredo in Naga by going to Vigan, Ilocos Sur,

Naga Mayor John Bongat, responding to a “sarcastic” post questioning his absence at the pro-Robredo event, said it was unintentional that he was out of town during the April 18 prayer rally, which he had not known about.

Bongat explained that he was in Vigan on that day to attend the swimming events for Palarong Pambansa where his daughter, Jade, is a contender.

Moreover, he was only told about the rally on April 17, when he was already in Ilocos Sur. His trip Vigan and his tickets had been planned and purchased much earlier, he added.

He also said no one had coordinated with him personally before the rally. He only learned from the city administrator that a councilor told him about the rally on the afternoon of April 17 to ask for a permit.

So nobody should be imputing malice on his Vigan trip, which is not a vacation and not an excuse to avoid the prayer rally for the VP, he said.

He wants to assure the public that he’s not avoiding Naga’s former first lady!

1) My absence was unintentional. The main reason I wasn’t there was I was not physically present in Naga;

2) The first time I learned about the rally was the night before (evening of April 17th), thru a chat group, when I was already in Vigan where my daughter, Jade, is playing in the swimming events for Bicol in the Palarong Pambansa which is being held there.

3) My trip to Vigan and plane tickets were purchased long before;

4) Nobody personally coordinated with me re that rally. I was informed by City Admin. Mr. Jun Tam Mongoso that Coun. Mila Raquid Arroyo personally informed him about the rally around 4pm of April 17th to ask for a permit in behalf of Atty. Ricky Tomotorgo.

Clearly, I was not in Vigan for a vacation. Neither was I there to avoid the prayer rally for VP Leni,” Bongat posted on Facebook.

Stay connected to others for your mental health, say former…