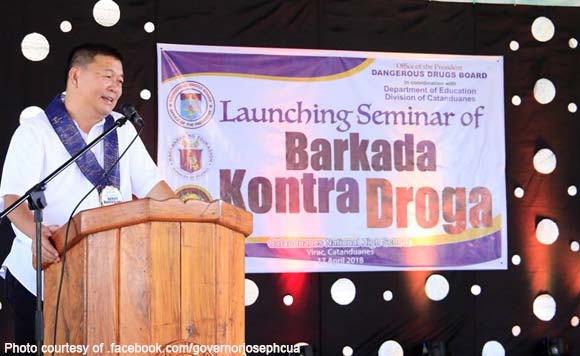 Speaking before the students and teachers from Division of Catanduanes, Barkada Kontra Droga members, Governor Cua said that he wants Catanduanes to become at least the first province in Bicol Region to get a drug-free status.

The seminar aims to promote awareness among students from different schools within the province about the effects of illegal drugs.

The governor also presented his programs against the proliferation of illegal drug activities in the province in line with the war on drugs of President Rodrigo Duterte.

Cua also shared to the participants that last month, Catanduanes was named one of the few recipients of the Regional Peace and Order award for having six drug-cleared barangays.

“At present, there are 60 more barangays soon to be declared as drug-cleared and 77 drug free barangays,” said the provincd.

Meanwhile, Atty. Ferdaussi B. Masnar, Legal Consultant of Dangerous Drugs Board, discussed the salient features of Republic Act 9165 or the Dangerous Drug Act of 2002.

Moreover, Dr. Bernardino A. Vicente, former director of the National Center of Mental Health discussed the medical aspect of drug abuse, and Ma. Sionne May Crispino talked about the Japan Drug Education Program.