Claiming it! | Robredo stands by being PH’s ‘one and only’ VP 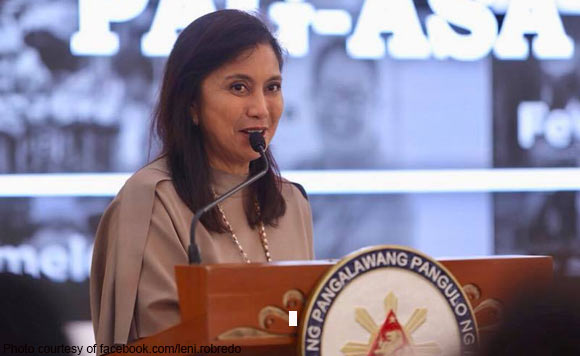 Leni Robredo is standing by her position as the “one and only” Vice President of the Philippines, amid the ongoing protest challenging her win in the 2016 polls.

While perceived to be elusive in commenting on the electoral protest lodged against her by former senator Bongbong Marcos, Robredo has hinted on the matter during her speeches this week.

At the Asian Forum on Enterprise for Society on Tuesday, the Vice President played along with businessman Ramon del Rosario Jr., when the latter gave her a stirring introduction and called her “the one and only duly-elected Vice President of the Republic of the Philippines.”

“Thank you for that generous introduction, and for emphasizing that I am the one and only duly-elected Vice President,” Robredo told Del Rosario during her speech, which was then met with cheers and applause from a crowd that included members of various sectors concerned with business and technology.

The following day, at the American Chamber of Commerce general luncheon meeting, the Vice President said she still finds herself “staunchly defending” her office “from the machinations of power and political ambition of those who want to subvert the will of the people.”

She added that her fight to keep her post is for the people counting on good governance, especially “those who have less in life and are in critical need of an inclusive environment to survive.”

“[E]very time I go to the poorest communities and see the faces of our people who are pinning their hopes on us, I try to remember that the judicious and responsible use of legitimate power is the one thing that is needed to protect the rights of those who do not have it,” she said.

“This is the ethos that moves the Office of the Vice President. We are not defending our position simply to seek power or entitlement. We are here to fulfill the hopes of our people who have put their trust on their government,” she added.

An initial recount of three pilot provinces chosen by Marcos is now ongoing before the Presidential Electoral Tribunal (PET).