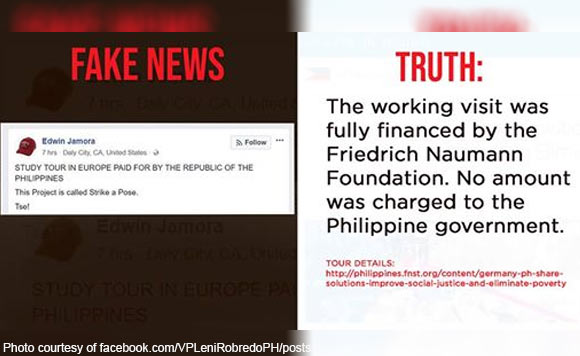 Robredo took to Facebook to blast false information being spread online that the Philippine government shouldered the costs of her working visit to Berlin, Germany.

The trip was fully financed by the Friedrich Naumann Foundation, she said. She also shared a link to the study tour that she took, for those who may want to learn more about it.

She also asked netizens to be critical and vigilant against fake news, which continue to abound.

“[Public Service Announcement]Vice President Leni Robredo’s recent working visit to Berlin, Germany was fully financed by Friedrich Naumann Foundation. Contrary to the fake news spreading online that this was “paid for by the Republic of the Philippines,” no amount was charged to the Philippine government.You may also check: http://philippines.fnst.org/…/germany-ph-share-solutions-im… to know more about the study tour.Let us be critical and vigilant against false information posted online and offline,” she posted.

Sent from Yahoo Mail for iPad