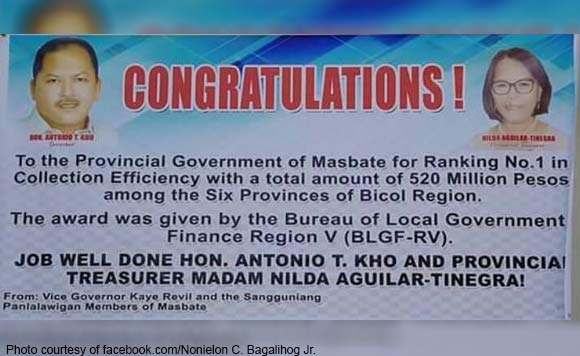 The Province of Masbate has bagged the number one spot in revenue collection efficiency, besting six other provinces in Bicol Region.

For 2017, the Province of Masbate has generated a total of P520 million, a 128% collection efficiency rate compared to the target of P407 million.

Nilda Tinegra, provincial treasurer, took home a recognition from the Bureau of Internal Revenue Region V for her performance.

The BIR recognized Tinegra for her “support for the Revenue Generation Program as part of the Major Final Output(MFO)-Regulation of LGU Financial Management” of the bureau.

The revenue of the province was sourced from Real Property Tax, Business Tax and Fees and income from economic enterprises.

The said increase in revenue generation means that the province has contributed a lot for the benefit of the entire country.

The said recognition was awarded last April 5 at the Ninong’s Hotel in Legazpi City.

The plaque of recognition was signed by BIR-V Acting Regional Director Ricardo Cawed.