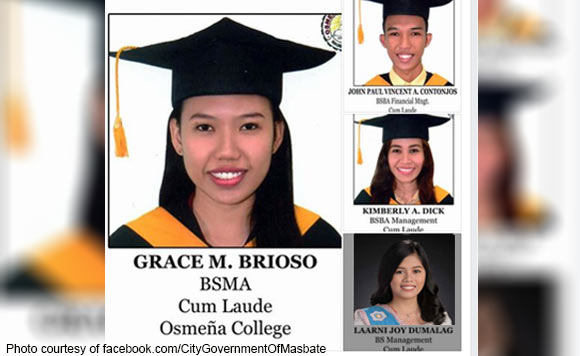 Masbate City Mayor Rowena Tuason couldn’t be more proud to all the city scholars who marched the graduation aisle this year.

Tuason said that she and the city council are so “proud” to those who graduated and wishes them good luck as they venture into the next chapter of their lives.

“HAPPY GRADUATION and may GOD bless you all as you pursue the next chapter of your lives,” the mayor said.

“The City Government is so proud of these students who made it to graduation,” she added.

Tuason revealed that more than 300 aspirants to be city scholars took the exam. Recently.

She said that she’s “hoping [that] all of them [would] pass the test.”

“Thanks Ate Cinky Valencia and Estela for taking care of our scholars and for constantly reminding them when they are not doing well in their studies,” said Tuason.

The city earlier said taht Mayor Rowena R. Tuason doubled the budget for the Scholarship Program, from P5M in 2016 to P10 Million in 2017.

“For SY 2017-2018, the Masbate City Government has 442 scholars in 21 colleges and university in the country, including the University of the Philippines,” said the city.