The Russians are coming, and Puerto Princesa loves it! 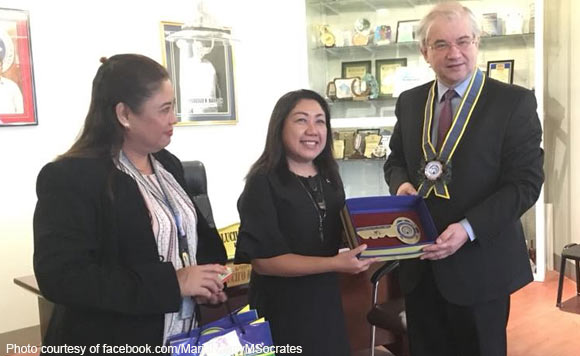 0 861
Share
Want more POLITIKO News? Get the latest newsfeed here. We publish dozens and dozens of politics-only news stories every hour. Click here to get to know more about your politiko - from trivial to crucial. it's our commitment to tell their stories. We follow your favorite POLITIKO like they are rockstars. If you are the politiko, always remember, your side is always our story. Read more. Find out more. Get the latest news here before it spreads on social media. Follow and bookmark this link. https://goo.gl/SvY8Kr

Socrates handed Khovaev the symbolic key to the city to indicate that Russians are very much welcome to come to Palawan, especially Puerto Princesa.

Khovaeve, in turn, explained that the Philippines was not that well-known yet in Russia, which was why its citizens often choose to vacation in Thailand instead.

He then invited the Palawan officials to visit Russia so that they themselves could promote their province as a tourist destination.

Russians would appreciate a personal invitation from Philippine officials to come visit, he said, and promised to send a letter of invitation to city government official who wishes to go to Russia.

Looks like this is the beginning of a beautiful friendship!

His Excellency Igor Khovaev, Russian Ambassador to the Philippines officially visits the island of Palawan to introduce Russia to the City and to the whole Province of Palawan.

According to him, unlike Thailand, the Philippines has less promotions in Russia, the reason why approximately 1.5 million Russians chose to vacation in Thailand rather than in Philippines last year. However, he expounded that besides the online advertisements that the Philippines has been doing, it is good for the city government officials to personally visit Russia and promote the whole island. He stressed that Russian people would appreciate if the invitation is done personally.

It is the first time that a Russian ambassador visited Puerto Princesa and Palawan. And he offered to send a letter of invitation to any city government official who wishes to visit Russia.

After an hour of sharing of thoughts, Acting Vice Mayor Maria Nancy M Socrates, representing the Hon. Mayor Lucilo R. Bayron, together with the City Tourism Officer Ms. Aileen Cynthia Amurao, PIO Richard Ligad, Atty. PJ Hilario and Asst City Admin Carlos Abogado handed over a key to the City as a token of appreciation, symbolizing that the doors of Puerto Princesa are open to all Russians who wish to visit and vacation in the city.

A stone of gratitude from the Honorable Mayor Lucilo R Bayron was also handed over. At present, the Honorable Mayor is on official business in Manila to attend matters affecting the interest of Puerto Princesans.(06.IV.2018),” Socrates posted on her Facebook page.