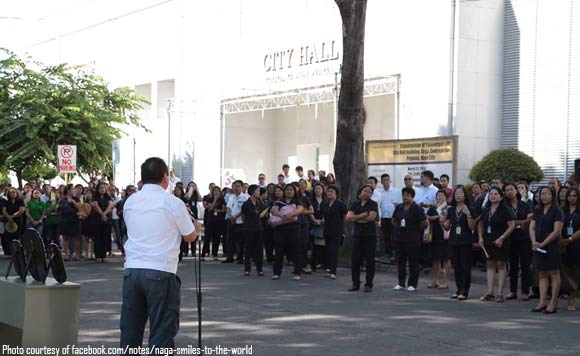 0 1,470
Share
Want more POLITIKO News? Get the latest newsfeed here. We publish dozens and dozens of politics-only news stories every hour. Click here to get to know more about your politiko - from trivial to crucial. it's our commitment to tell their stories. We follow your favorite POLITIKO like they are rockstars. If you are the politiko, always remember, your side is always our story. Read more. Find out more. Get the latest news here before it spreads on social media. Follow and bookmark this link. https://goo.gl/SvY8Kr

The City Government of Naga is giving its employees an opportunity to further complete the required educational attainment to qualify for certain permanent office positions in the city hall.

Naga City Mayor John Bongat said that he wants to grant city hall employees the security of tenure in their job positions in the least and the right compensation that would actually amount to their service.”

The city government said that they are also public servants who have been working alongside the city officials in attending to the community needs of the city and its people.

“As permanent positions being offered in the government services require certain educational achievement and eligibility, Mayor Bongat highly encourages the employees to avail themselves of necessary education and government examinations to comply with the requirements for their career advancement in the city government,” the city said.

The scholarship grants are now being offered at the City College of Naga, including courses on midwifery and office administration, which could “fit the needs of some offices.”

“Around 40 employees are already enrolled in the city college who are attending their classes at 5:00pm every after office hours and during the weekends,” the city said.