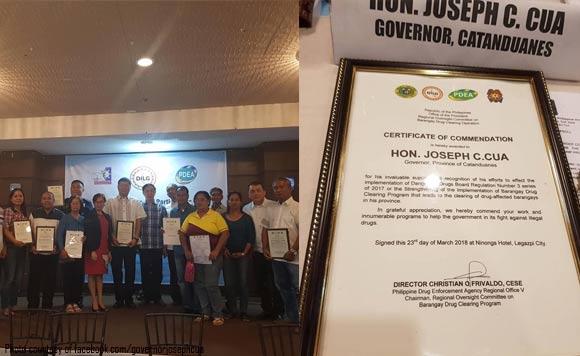 “Following its recognition as one of the recipients of the first Regional Peace and Order Committee award for drug-cleared barangay, the Province of Catanduanes, headed by Governor Joseph C. Cua vows to continue its efforts to pursue a drug-free province status,” the province said

Cua said that he supports the war on drugs against illegal drugs of President Rodrigo Duterte and the province is dead serious in its pursuit of the drug-free province tag.

According to Provincial Oversight Committee, at present Catanduanes has six drug-cleared barangays, namely, Salvacion, San Lorenzo and Osmena of Baras, Obo and Pangilao of San Miguel, and San Andres of Pandan; 62 barangays to be declared as drug-cleared, 77 unaffected or drug-free barangays.

“The DILG provincial office, as the lead agency of the Provincial Oversight Committee said that this proves that the province is very aggressive and serious in its drug clearing efforts in support of the national thrust,” said the province.

Former Department of Interior and Local Government undersecretary and now Dangerous Drug Board Chairman Catalino Cuy told the recipients of the award to maintain the fearless campaign against illegal drugs.

Cuy added that there is a need for vigilance and cooperation from all the agencies and as well as the community to be declared as drug-cleared.