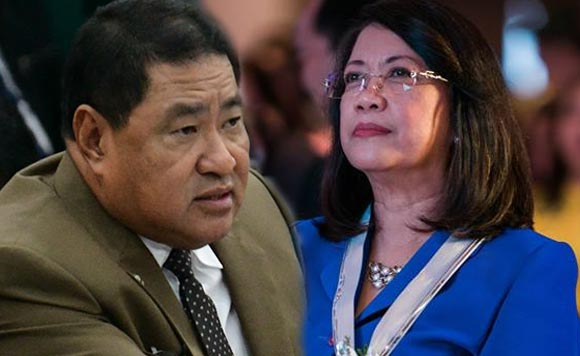 Just like Jesus who sacrificed his life for the greater good, Oriental Mindoro Rep. Reynaldo Umali told the embattled Chief Justice Lourdes Sereno to reflect and just resign to save the “divided” Supreme Court.

In an Easter Sunday message, Umali said that as a Catholic, “there is a need to pray and ponder the sacrifices of Jesus, and – more importantly – to contemplate how this lesson of selflessness can be applied to one’s self.”

“In the present situation, I would advise for her to consider the option of resigning. Contrary to the bad press, the act of resignation is her only honorable recourse given the numerous offenses revealed in the series of hearings conducted by the House Committee on Justice,” said Umali.

He added that public officials, among others, are the ones expected to carry the reflection on the sacrifices of Jesus.

“We are expected, after all, to be role models and servant leaders of the people. The Lenten season offers the rare opportunity to break away from the noise of politics and the complexities of our posts in order to look inwards and ask the question: are we observing the values of humility and love that Christ taught? Are we truly serving the country and the people?,” said Umali.

Umali also cited the testimonies of “multiple resource persons” which showed cracks in the Judiciary, which even resulted Sereno’s taking of indefinite leave.

“The fact that the Supreme Court en banc urged Sereno to take an indefinite leave is only a consequence of years of unacceptable leadership. Her pattern of abusing her position, over-stepping her boundaries, and pushing for appointments and arrangements that have been detrimental to the health of the Supreme Court are not only a betrayal to her fellow Justices but also a grave disloyalty to all Filipino people,” said Umali.

The solon added that even if Sereno gets acquitted, she will stand the risk of returning to a “broken” Supreme Court.

“Even now, there is little trust and confidence on her ability to lead. There are grievances spoken by Justices and other magistrates which she has yet to respond to or even claim accountability for. I am also certain, given her personality disorder, that she will exact revenge on those who spoke against her. What will happen to our nation’s Supreme Court then?,” said Umali.

Meanwhile, Umali, the chairman of the powerful House committee on Justice, said that Sereno was afforded due process during the hearings conducted by the panel.

“The Chief Justice may well think of herself as the victim of a ‘crucifixion’, but I would like to assure her that hearings were done with due cause and process. Her best option now will be to spare the Court with another lengthy process of impeachment and to spare the public from the aggravation. This will pave for the way for her – and the people’s – salvation from corruption and incompetence,” he said.