75 homeless families in Catanduanes get housing units from National Government 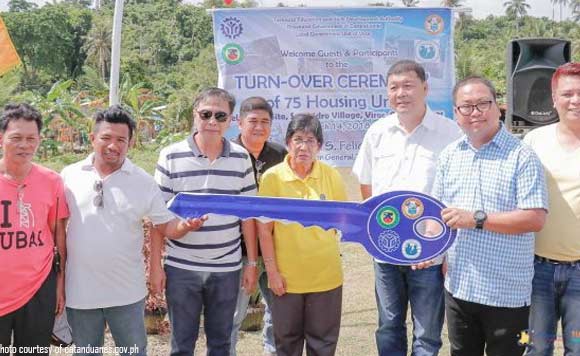 0 744
Share
Want more POLITIKO News? Get the latest newsfeed here. We publish dozens and dozens of politics-only news stories every hour. Click here to get to know more about your politiko - from trivial to crucial. it's our commitment to tell their stories. We follow your favorite POLITIKO like they are rockstars. If you are the politiko, always remember, your side is always our story. Read more. Find out more. Get the latest news here before it spreads on social media. Follow and bookmark this link. https://goo.gl/SvY8Kr

Seventy-five families In Catanduanes finally have a place which they can call their own home.

A year after rebuilding their shelters, 75 families who were left homeless after being hit by the Typhoon Nina received last month their housing units from the national government.

The project aims to help the residents of the Relocation Site to rebuild their houses through the Training-Cum-Production (TCP) project.

In his message, TESDA Deputy Director General Alvin S. Feliciano said that TESDA became an instrument in realizing this project for two main reasons, first is to rebuild their houses, and to give them sustainable income by teaching them Masonry and Carpentry in which their first project was their houses.

Catanduanes Governor Joseph Cua, in his speech, assured everyone of his “unwavering support” for every project that will benefit the informal settlers.

The Governor also reiterated the importance of the new scheme of TESDA which aims to enhance the skills of its trainees to attain jobs that will surely help them.