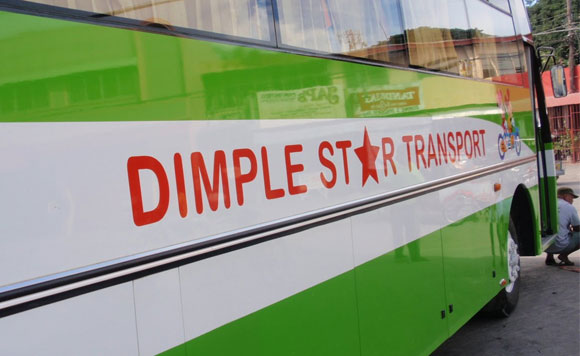 0 551
Share
Want more POLITIKO News? Get the latest newsfeed here. We publish dozens and dozens of politics-only news stories every hour. Click here to get to know more about your politiko - from trivial to crucial. it's our commitment to tell their stories. We follow your favorite POLITIKO like they are rockstars. If you are the politiko, always remember, your side is always our story. Read more. Find out more. Get the latest news here before it spreads on social media. Follow and bookmark this link. https://goo.gl/SvY8Kr

The Land Transportation Franchising and Regulatory Board (LTFRB) has suspended the entire bus fleet of the Dimple Star Bus Company after one its units figured in an accident that killed 19 people in Sablayan, Occidental Mindoro evening of March 20.

The LTFRB on Friday issued Dimple Star and its owner, Hilbert Napat, a 30-day preventive suspension order for all its 118 bus units covering 10 certificates of public convenience (CPC).

Dimple Star must also undergo an inspection for roadworthiness of its buses, to be done at its garage and for its drivers to have a road safety seminar.

This developed after Department of Transportation (DOTr) Secretary Arthur Tugade directed the LTFRB to ensure that stiffer sanctions are imposed against the bus company.

“Sa ating paghahanapbuhay dapat ay huwag tayong kumitil ng buhay. Eto na naman ang trahedya sa Mindoro. Ilan pa dapat ang mamatay at masugatan para maunawaan at matanggap na dapat na talagang ipatupad at isulong ang transport modernization? (In pursuing our livelihood, we should not sacrifice lives. We have another tragedy in Mindoro. How many more should die and get hurt before we understand and accept that we must implement and pursue transport modernization?),” Tugade said in a statement.

In a press briefing Thursday, LTFRB Chairman Martin Delgra III said there was no thorough roadworthiness inspection of Dimple Star’s bus units when he inspected its terminal in Cubao, Quezon City.

“The situation was pathetic. What I saw was horrible. It could be a garage but it cannot be a terminal,” Delgra said.

The Board found that Dimple Star’s terminal has no sufficient roofing for heat and rain; no adequate and comfortable benches for waiting passengers; and its terminal is unpaved, among others.

The LTFRB is coordinating with insurance companies and transport groups on the increase of the insurance coverage for death and injury from PHP200,000 to PHP400,000 and from PHP20,000 to PHP100,000 to those injured. The recommendation was approved by the Board Friday.

A Dimple Star Bus fell off a cliff along a national highway in Sablayan, Occidental Mindoro at about 9:30 p.m. Tuesday.

The bus, with plate number TYU 708, was north bound from San Jose to Abra de Ilog when the vehicle reportedly lost control and fell off a cliff, killing 19 passengers and injuring 21 others.

Dimple Star has been involved in eight accidents resulting in the death of more than 25 people and leaving an estimated 154 people injured from 2011 to 2018, according to the DOTr. (PNA)