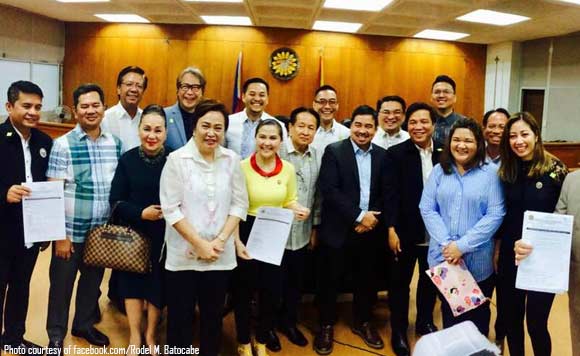 0 574
Share
Want more POLITIKO News? Get the latest newsfeed here. We publish dozens and dozens of politics-only news stories every hour. Click here to get to know more about your politiko - from trivial to crucial. it's our commitment to tell their stories. We follow your favorite POLITIKO like they are rockstars. If you are the politiko, always remember, your side is always our story. Read more. Find out more. Get the latest news here before it spreads on social media. Follow and bookmark this link. https://goo.gl/SvY8Kr

It seems all the “no-el” speculations haven’t affected the party list lawmakers.

The members of the Party List Coalition in the House of Representatives filed their manifestations of intent to participate in next year’s elections before the Commission on Elections, the group’s president Ako Bicol Rep. Rodel Batocabe said on Facebook.

Batocabe also led the launch of the coffee table book highlighting the achievements of the coalition’s members, who he described as the “ probably the most hardworking, dedicated and diligent group of legislators.”

With their plan to campaign in the 2019 elections, it looks as if the proposal to postpone the polls to make way for charter change moves has been deferred.

It’s business as usual next year!

“Today, members of the PartyList Coalition filed our respective Manifestation of Intent to Participate in the 2019 elections before the Comelec.On behalf of the Coalition, I presented our coffee table highlighting the acievements of the members of the coalition, probably the most hardworking, dedicated and diligent group of legislators. As President of our group, I likewise thanked the Comelec especially, Acting Chair Al Parreno and Commissioner Rowena Guanzon , who were both present and discussed their programs on gender and development and their readiness to hold barangay elections,” he said on Facebook.