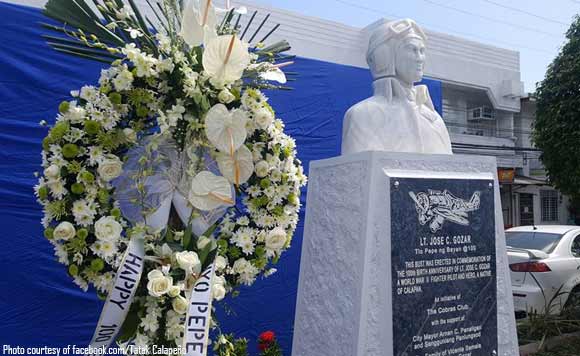 Calapan City Mayor Arnan Panaligan has led the unveiling of the monument of Lt. Jose Gozar, considered a World War II hero from the city.

According to the city, Lt. Gozar was a native of Calapan City, military pilot and World War II hero. He was a member of the 6th Pursuit Squadron of the Philippine Army Air Corps who “engaged Japanese warplanes in aerial combat and was credited with shooting down two Japanese bombers.”

“After the Fall of Bataan in 1942, he continued fighting the Japanese invaders by joining the guerilla resistance. He was missing in action after the seacraft he was riding on was lost at sea,” the city said.

“No less than Gen. Douglas MacArthur, commander of the US Armed Forces in the Far East, cited him for his gallantry in action,” it added.

Present during the the ceremony were Vice Mayor Gil Ramirez, City Councilors, and other City Government officials.

Members of the family of the late Lt. Gozar were also in attendant in the momentous event, represented by his niece, Ms. Edna Gozar Samala.